Source of all Gohma

Manifestation of the planet Gaea's will

Wipe out all creatures and claim their souls (failed).

Gohma Vlitra is the dark manifestation of the planet Gaea’s very will, the source of all Gohma, and the secondary antagonist of Asura’s Wrath.

Ages ago, Mother Gaea became angered that the cycle of life and death had greatly been disrupted with the souls of mortals not returning to her and being turned into mantra. To take back those souls, Chakravartin created Vlitra along with all the other Gohma and they engaged in a never-ending war with the demigods of Gaea. Thus began a cycle of Vlitra appearing, more and more powerful with every subsequent appearance, barely staved off by the demigods each time.

In one major battle between the demigods of Shinkoku and the Gohma, Vlitra appeared and attacked the Shinkoku fleet, destroying many ships. The Eight Guardian Generals quickly moved to engage the beast with Asura in particular taking it on. He managed to damage and finally subdue Vlitra temporarily, but it was far from destroyed. 12,500 years later, Vlitra emerged once again, just as Asura and Yasha had defeated Deus, far more powerful and massive than the last time Asura had fought. The two demigods engaged it, fending off its powerful attacks, and tried to attack Vlitra’s center. But the face at the center of the monster’s new form unleashed a massive energy blast, devastating the two. However, Mithra sent Asura and Yasha mantra from the Karma Fortress, empowering them, especially Asura. The two forced their way into Vlitra’s mouth, forcing their way through its energy blast attack and breaking into its core at the center of Gaea. However, the core manifested as Vlitra Core, a large monster greatly resembling Asura’s Berserker form. It engaged Asura and Yasha in one final battle, but despite its incredible power, the two managed to destroy it, wiping out Vlitra completely.

Vlitra is immensely powerful, to the point that its impurity level is described as "immeasurable". In addition to being the source of all other Gohma, it is a tremendous foe in its own right, able to deliver crushing blows and deadly energy attacks while withstanding almost all punishment from its foes. This resilience is largely due to the fact that the Guardian Generals were never able to penetrate Gohma Vlitra's core, which contains its life force - as long as the core remained intact, Gohma Vlitra's defeats were only temporary, lasting as long as the monster needed to recover its strength.

Vlitra first seen confrontation with Asura and the Guardian Generals, Gohma Vlitra appeared as a large serpentine monster made of rock and lava from Gaea's core. In this form, Vlitra projected massive amounts of energy from its mouth, either as wide-ranging barrages or concentrated blasts.

When Gohma Vlitra emerges from Gaea after the defeat of Deus, it manifests as an enormous, bestial face formed from fiery chasms on the side of the planet. The face is surrounded by eight serpentine heads with similar abilities to Vlitra’s previous form, but on a wider scale due to the increased number of heads. The central face can release even stronger blasts of its own, especially when focusing energy through its eight auxiliary heads. However, the central face is also Vlitra's fatal flaw, as it acts as a direct path to the titan's core. The Vlitra Core is a more mobile and flexible opponent than its outer body, able to unleash powerful physical strikes and lethal energy beams. It can also teleport around, send out waves of explosive lava pillars, and form lava rock-like projectiles that it fires through the air. 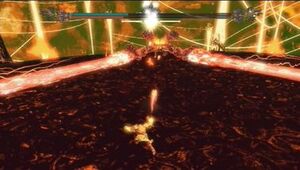 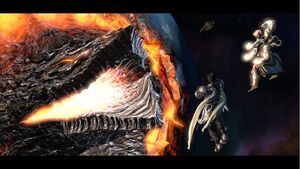 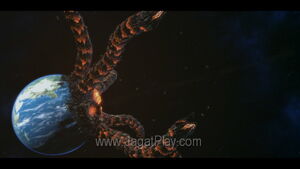