Goku makes his first appearance in the animation No Name, flying around Black Waltz and Matt before destroying the Earth and his foes with his Kamehameha. The canon status of this animation is debatable, as other entries seem to also take place on Earth.

Goku returns in FF Battle as the final opponent, challenging Matt and Kat to another duel. Killing Kat and taking Matt's original weapon, he is split in two by Matt's Zanmato after a battle against the hero.

Returning as a zombie, Goku returns as the final boss of Brawl Royale, attempting to kill Matt with a powerful magic attack before he is split apart once more, but not before the attack again destroying the Earth. Once more, the planet is unexplainably reformed after this attack.

Appearing once more as the final boss in Epic Battle Fantasy, Goku returns in his zombified form, awaiting Matt and Natalie in the graveyard to challenge them to another battle. Although he is possibly killed for good here, the massive bursts of energy caused by his defeat sets up the events for the sequel.

Despite his demise, Matt makes a reference to Goku after being hit by the Ancient Monolith's laser attack, noting a foe with a similar beam attack who had golden hair.

In Epic Battle Fantasy 4, a tombstone exists in Graybone Cemetary for Goku.

In his first appearance in No Name and FF Battle, Goku sports his Super Saiyan 1 form, wearing an orange outfit with King Kai's symbol emblazoned on it. After he died, Goku returns in the form of a zombified Super Saiyan 3, wearing a shirt with a chemical symbol on it, a blue jacket, an amulet with a pentagram drawn on it nailed to his forehead, and jeans. In his Epic Battle Fantasy outfit, he has his intestines hanging out of him, a red slash mark on the side of his face, a few more pentagram amulets, and he wields Anarchy, a black jagged Stygian metal sword.

Goku is often shown as one of the strongest beings in the whole series, being the only one to beat Matt without hacks. In terms of power, he is second to only Godcat and probably Akron (considering that it took three heroes to stop Akron, but only two could destroy Zombie Goku). He is also very skilled with a sword, and retains his Kamehameha blast and Spirit Bomb from Dragon Ball Z. His ability to fly might have been lost after zombification. 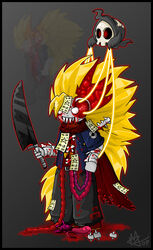 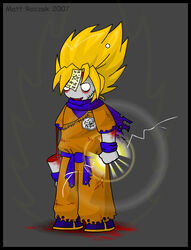