After Lord Zedd came to the moon and took over from Rita, Goldar eagerly accepted his new master and received the restoration of his wings. He led many missions in Zedd's name and often faced Tommy, now the White Ranger, but would get defeated each time and sent back to his master in disgrace. Goldar was aghast when Zedd married Rita and wondered what could have made his master do something completely out of his mind. He found out what the sorceress did to his master and removed the love potion from his system, only to be floored by finding out Zedd still loved Rita. After Rito Revolto came to the moon, Goldar often worked with him but detested his stupidity and stench, though they later became friends of sorts. Goldar managed to prove quite useful in Zedd's plan to activate the Shogunzords since he defeated Ninjor, allowing his master to capture him.

Zeo and In Space

After blowing up the Royal House of Gadgetry, Goldar accompanied Zedd and Rita to the meeting of the United Alliance of Evil on the Cimmerian Planet. He took part in Dark Specter's galactic invasion, helping his masters' attack on the Vica Galaxy and subduing the Gold Ranger. Goldar's fate is left unknown and it is presumed he was destroyed or purified by Zordon's energy wave.

Unlike many other henchmen, Goldar was one of the few who was capable of holding his own against the entire Power Ranger team. As time went by in the series, Goldar's character became less threatening and more comical, especially in the first feature film. He was a dangerous fighter initially, being able to defeat the original team in battle single-handedly. Later, however, he began to lose his edge, with Jason handing him his first major defeat in the episode Missing Green. After this point he was apparently less powerful, losing to the rangers more and more in combat.

Goldar is a powerful and influential warrior, who is skilled at fighting with his sword, and can also fly and grow to giant size. He has the ability to grab his eyebrows, and release Eye Lazer Blasts. His sword can also release a blast. His Titanian armor, most likely named for his birthplace, adds to his formidability. 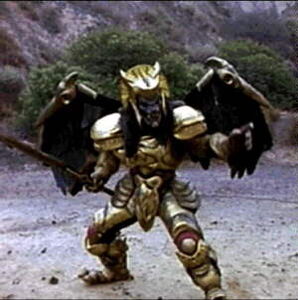 Retrieved from "https://villains.fandom.com/wiki/Goldar?oldid=3314314"
Community content is available under CC-BY-SA unless otherwise noted.