Captain of the Demoniac.

Defeat Zak Storm and the 7C's (both failed).

Golden Bones is the secondary antagonist of the 2018 series Zak Storm: Super Pirate. He is the general of Skullivar's army, who constantly pursues Zak Storm and the 7C's to steal the magical sword Calabrass for his master.

He was voiced by Matt Mercer.

In "Origins Part 1", Golden Bones is called forth by Skullivar and is subsequently sent to investigate an ancient presence in the Sea of Beru. Golden Bones, swearing to scour every inch of the sea, then leaves in the Demoniac. Soon after Zak Storm boards the Chaos, Golden Bones shoots at the ship and spots Zak's necklace, recognizing it as the Eye of Beru. He then orders his minions to raise the Demoniac above the sea to lay siege to the Chaos.

While Zak and Clovis are conversing, Golden Bones jumps down on to the Chaos and attacks Zak, attempting to take the Eye of Beru by force. Explaining that Skullivar desires his necklace, Golden Bones ends up pressuring Zak into almost relinquishing it, only for the Plank to shoot out and hover Zak away. Golden Bones angrily orders his minions to shoot down Zak, however, they are all defeated by Zak ramming the Plank into them. Once Zak lands back on the Chaos, Golden Bones sics more of his minions on him, before pinning him to the ship with his hook. Bones then lifts Zak off the ground and lectures him on how Skullivar wants him alive so that he can explain where he found the Eye of Beru, before stealing it and locking Zak in the captain's quarters.

Back on the Demoniac, Golden Bones wonders how Zak acquired the Eye of Beru, and orders his minions to search the Chaos, claiming there is another being on it. One of his minions soon tells Golden Bones that they have searched the entire ship and found nothing, enraging him. Clovis then attacks Golden Bones and tricks him into attacking his minions before breaking the lock on the door to the captain's quarters, freeing Zak. Golden Bones then grabs Clovis, explaining that he can hold the poltergeist due to also having "gone to the other side", although Zak breaks his hold by throwing one of his minion's skulls at him, also getting the Eye of Beru back thanks to Clovis. Zak manages to climb to the top of the ship and activate Calabrass by inserting his necklace into the sword. Recognizing Calabrass as "the great key", Golden Bones lashes out at his minions for not finding the sword earlier.

Deciding to take care of things himself, Golden Bones begins climbing the sails to destroy Zak, however, Calabrass gets Zak to activate the Eye of Blazz and begins fighting him back with new pyrokinetic abilities. Golden Bones succeeds in knocking Calabrass away, although Zak swiftly regains him and continues the fight before Calabrass loses power, and the powers of the Eye of Blazz fade away. Zak and Calabrass retreat to the Chaos, and Golden Bones decides to simply destroy the ship and fish out Calabrass. However, Zak takes command of the Chaos and has the ship deal heavy damage towards the Demoniac before escaping. Golden Bones retreats to the Netherwhere, where Skullivar berates him for loosing, demanding that he take Calabrass and the Seven Eyes of the Seven Seas before Zak realizes the power he has.

In "Origins Part 2", Skullivar again berates Golden Bones for his failure, and the latter states that their spies have spotted Zak on Marituga. Skullivar sends Golden Bones to retrieve Calabrass, threatening to find a new general if he fails. Later, Golden Bones and his minions sneak up on Zak while he is battling Cece and Crogar, allowing Cece to swipe Calabrass and runoff. Golden Bones grabs Zak and orders his minions to pursue Cece and Crogar, soon cornering them. With Calabrass's advice, Cece decides to give him up and tosses him back to Zak, who frees himself from Bones' grasp, although he is unable to empower himself with one of the Eyes due to Calabrass losing energy. Golden Bones prepares to kill Zak and his friends, however, before this can happen, Caramba arrives and helps defeat most of the skeletons, before knocking Bones off the edge.

Once Zak and his friends have all returned to the Chaos, Golden Bones proclaims that, if he relinquishes Calabrass, the Chaos and swears loyalty, he will let him live, and even throw in a good word to his master so he can send him home. Zak decides to not take Golden Bones up on his offer, claiming that, even if he wants to go home, he can't sell out to him, and will help his friends get home once he does. Golden Bones prepares to have his minions shoot down the Chaos, only for Zak to stall so that Caramba can finish fixing the ship, before freezing all of the pirates with the Eye of Sinnoh and sailing away. Once again defeated, Golden Bones breaks out of the ice and declares that he loathes Zak.

In "Morlock the Unstoppable", Zak stumbles upon Golden Bones and his crew while looking for treasure, and battles them for the treasure chest they were trying to carry away. Although overpowered by Zak and his crew at first, as they start to become outnumbered, Golden Bones succeeds in sneaking off with the treasure. Back in the Netherwhere, Golden Bones is confused as to why Skullivar wanted the contents of the chest, believing it to be a "hunk of junk", only for Skullivar to correct him, revealing that it has much more value as he uses it to complete the indestructible Morlock armor, which he controls directly. After Morlock captures Zak and the 7C's, Golden Bones drives them back to the Netherwhere in the Demoniac, where Skullivar plans to unlock the powers of Calabrass. However, Zak manages to free himself and his friends, Crogar easily taking out Golden Bones and some of his minions, and succeed in dismantling the Morlock armor and sinking it to the bottom of the ocean covered in hardened magma. As the 7C's celebrate, Golden Bones gets back up and reminds them that they are still headed to the Netherwhere, although Zak had planned, having Clovis mess with the Demoniac's controls and send the ship spiraling out of control while he and his friends escape.

Golden Bones is a ruthless and determined pirate who is not willing to let anyone or anything stand in the way of his goals. Whenever he loses or is incapacitated, he becomes enraged and lashes out at whatever is around him, be it his enemies or even his henchmen. He is incredibly arrogant whenever fighting Zak and his crew, which results in him underestimating his foes and usually results in his defeat. He can also be incredibly sadistic and loves to see his opponents fearful and afraid, even claiming that he "loves it when they run" during his first encounter with Zak. Despite his temperamental tendencies, Bones is extremely loyal to Skullivar, to the point of referring to him as "all-powerful", and hates the idea of failing him more than anything, whether it be out of a legitimate dislike of disappointing his master or simply because he does not want to be replaced or destroyed. He can also be somewhat insecure about his position and fees the need to remind Skullivar of his value, as shown in "Morlock the Unstoppable", where he tells his master that the position of his emissary is already filled by someone capable. 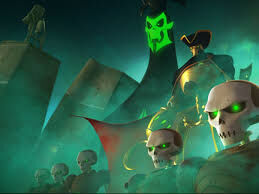 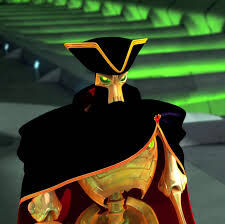 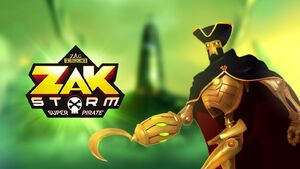 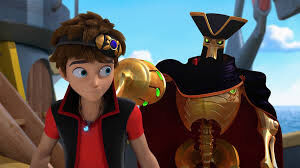 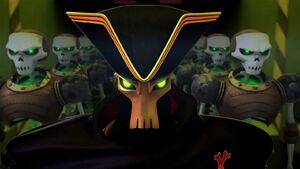 Golden Bones with his crew. 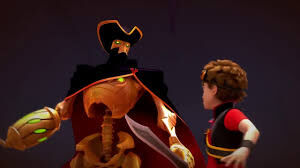 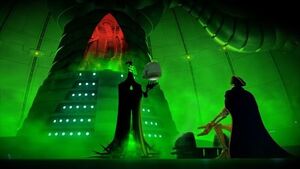 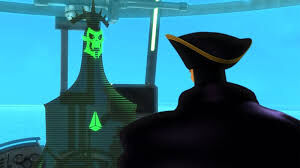 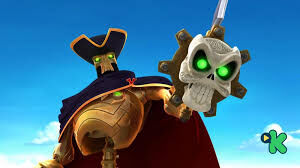