Villains Wiki
Register
Don't have an account?
Sign In
Advertisement
in: Journey to the West Villains, Book Villains, Genocidal,
and 14 more

Trapped in the Mortal World by Buddha

The Golden Cicada is an "Antagonist" in Buddist Literature, it showed disrespect to the Buddha-Fa, and was banished to the Mortal-World as Punishment, and had to suffer 10 incarnations in a row. The Golden Cicada has only one Vessel, Tang Sanzang but possibly has many more.

The Golden Cicada has one Vessel shown, since it was banished to the Mortal-World. its Vessel is rather Benevolent, but its true form is said to be disrespectful and malevolent. 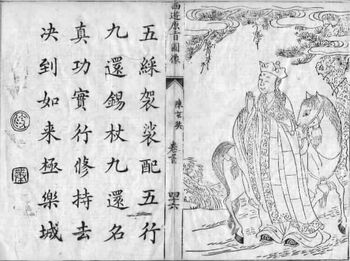 Tang Sanzang is a Chinese Buddhist monk who had renounced his family to join the Sangha from childhood. He is sent on a mission to Tianzhu (an ancient Chinese name for India) to fetch a set of Buddhist scriptures back to China for the purpose of spreading Buddhism in his native land. He becomes sworn brothers with Emperor Taizong of the Tang Dynasty, and the emperor sees him off from the capital Chang'an and orders two escorts to accompany him. Tang Sanzang is helpless in defending himself and his two escorts are killed during his first encounter with demons after his departure from Chang'an. The bodhisattva Avalokiteśvara (Guanyin) helps Tang Sanzang find three powerful supernatural beings – Sun Wukong, Zhu Bajie and Sha Wujing – to aid and protect him on his journey. The three become Tang Sanzang's disciples and receive enlightenment and redemption for their past sins once the pilgrimage is complete.

The cicada symbolises rebirth and immortality in Chinese tradition, thus a lot of people have Golden Cicada Idol's as Items. In the Chinese essay "Thirty-Six Stratagems", the phrase "to shed the golden cicada skin" is the poetic name for using a decoy (leaving the exuvia) to fool enemies. In Japan, the cicada is associated with the summer season.

There is also a ritual of the Golden Cicada , a mini rebirth and shedding of your old way of being. The cicada is an auspicious symbol of new beginnings and transformation. This Feng Shui ritual, uses the symbolism of the cicada and the power of cinnabar to cleanse, transform, and drop past negatives.

the Golden Cicada can possibly be represented by the double Drummer Cicada (Thopha saccate), a real-life species of cicada that has a Gold Coloration, with black stripes on its abdomen and what seems like an Orange M on the back of it. It is the largest Australian species of cicada and reputedly the loudest insect in the world. Documented by the Danish zoologist Johan Christian Fabricius in 1803, it was the first described and named cicada native to Australia. Its common name comes from the large dark red-brown sac-like pockets that the adult male has on each side of its abdomen—the "double drums"—that are used to amplify the sound it produces. Broad-headed compared with other cicadas, the double drummer is mostly brown with a black pattern across the back of its thorax, and has red-brown and black underparts. The sexes are similar in appearance, though the female lacks the male's tymbals and sac-like covers. Adult double drummers generally perch high in the branches of large eucalypts. They emerge from the ground where they have spent several years as nymphs from November until March, and live for another four to five weeks. They appear in great numbers in some years, yet are absent in others.