Golden Freddy is a major antagonist in the Five Nights at Freddy's franchise. He is a mysterious ghost incarnation of Fredbear, the mascot of the original restaurant, Fredbear's Family Diner.

In the non canon novel trilogy, he is actually the ghost of a murdered child named Michael Brooks.

Golden Freddy appears to be a cross between Freddy and Fredbear with missing eyes. His hat and bow tie appear to be tinted dark blue, as opposed to Freddy's black ones and Fredbear's purple ones, though this may be the result of lighting. In the office, he has extremely small white pupils, but the close-up of his face doesn't show them. Golden Freddy is the Animatronic ghost version of a dead child, possibly named Cassidy. In the "Thank You!" image, Golden Freddy has animatronic eyes. This is a mistake made by Scott, as the head is reused from one of Freddy Fazbear's jumpscares in Five Nights at Freddy's.

As confirmed by numerous sources, Golden Freddy is heavily linked to Fredbear, yet can't be classified as the actual Fredbear as he has too many ghost-like abilities which mean he is a noncorporeal ghost that takes the form of a Fredbear-lookalike.

Five Nights at Freddy's AR: Special Delivery is noticeably the first game in the series where Golden Freddy is actually golden, and not yellow.

Note: This is in the order of the timeline.

Cassidy was a little girl killed by William Afton while he was wearing the Spring Bonnie suit. Her body was put in Fredbear, by William or the Puppet. As explained in Fazbear Frights: Step Closer, similar to Susie and Chica, Cassidy's body and remnant separate one another, with her body remaining in the Fredbear suit, while her remnant took the form of a ghost representing a yellow version of Freddy Fazbear, becoming Golden Freddy.

However, it is often theorised that the child bitten by Fredbear in Five Nights at Freddy's 4 became Golden Freddy.

Due to the events of Five Nights at Freddy's 4 and the unseen Missing Children Incident, the event that lead to Cassidy's death, the original four animatronics, including Fredbear, were put in the Parts/Service Room, but kept for spare parts.

In 1987, Golden Freddy can be glimpsed on a number of posters drawn by children. The company tried to repair the original four animatronics, fitting them with facial recognition software, but they were deemed ugly, so were left for spare parts in the Parts/Service room. In the minigame SAVETHEM, Golden Freddy can be seen in various rooms, disappearing if Freddy comes near to him.

Golden Freddy becomes active on Night 6, and can teleport to the Office hallway in the form of a floating head, or within the Office itself to kill the next night guard, Jeremy Fitzgerald. Jeremy fends him off by putting on the Freddy Head the moment he sees Freddy inside the Office, fooling the ghost. As well as this, Jeremy could turn off the Flashlight while Golden Freddy was in the hall. After Fritz Smith's shift on Night 7, where the animatronic's AI levels are altered, the original four animatronics are repaired and taken to the Five Nights at Freddy's pizzeria. Golden Freddy takes the form of a yellow repaired Freddy Fazbear.

During Mike Schmidt's shift, Golden Freddy is not openly attacking him and only shows up as an easter egg on two occasions. Firstly when checking CAM 2B, the Freddy poster can rarely change into a Golden Freddy poster, accompanied by a giggle, at which point Golden Freddy appears in the Office. The only way Mike can save himself is by flicking the monitor up, which causes Golden Freddy to vanish. If the player is killed by Golden Freddy, the game crashes. Golden Freddy's jumpscare could be heard cutting off Phone Guy's Night 4 phone call, implying he was the one who killed him. The second easter egg happens whenever the player sets the animatronic AI's to 1/9/8/7 in the Custom Night mode. Instead of starting the night with the selected difficulty settings, Golden Freddy instantly jumpscares the player and forces the game to crash.

Golden Freddy appears the minigames, one of which further hints that he was the mascot of the original restaurant, Fredbear's Family Diner, along with Spring Bonnie. The Golden Freddy child appears in Happiest Day. Here, the child possessing him is standing behind a table. They are given cake by the Puppet, and, after the Golden Freddy mask appears on the child's face, they vanish, leaving the mask behind.

While Golden Freddy himself doesn't appear in the game, Fredbear, the animatronic that Golden Freddy is based on, appears in the minigames.

The withered version of Golden Freddy appears as an antagonist in the game Five Nights at Freddy's: Ultimate Custom Night. Like in other games in the series, Golden Freddy may appear in the player's office. The player only has a short amount of time to put up their monitor or put on the Freddy head when catching a glimpse of him to make Golden Freddy disappear before Golden Freddy kills the player.

It is heavily implied the the soul within Golden Freddy was the one who set up Five Nights at Freddy's: Ultimate Custom Night as William's personal hell after the events of Freddy Fazbear's Pizzeria Simulator. They are referred to are "The One You Should Not Have Killed", and can occasionally be seen smiling maliciously at William. They also seemingly speak though Happy Frog, Nedd Bear, and Orville Elephant, leaving William vengeful messages.

If the player completes all of the anime cutscenes, a final one will play after completing another challenge showing the classic version of Golden Freddy twitching on the ground as he fades into the darkness. This serves as another hint that the soul inside Golden Freddy (Cassidy?) still exists as a ghost and is indeed the one controlling the personal hell William is trapped in.

Golden Freddy is a combination of most of the animatronics before him. His footsteps are silent and he haywires frequently. When the encounter starts, his face and "IT'S ME" will flash on the screen quickly. The player has to use a tablet to rotate the mechanics used to defeat Golden Freddy: a flashlight, a mask, the shocker and the timer. When he haywires, the player must put on the mask, like the Toys. They must look at him when he has white eyes, and look away if he has red, like Springtrap. He must be shocked three times to be defeated, with the face and "IT'S ME" appearing when you get to the next phase. In the first phase, you only need to use the mask, flashlight and shocker. The second phase is quite similiar, but he now has Toy Freddy's power draining mechanic. In the third phase, you need to find his hat and shock him for the third and final time, defeating the golden bear.

However, as Charlie and her friends attempt to leave, William Afton, now wearing the Spring Bonnie suit, grabs her by the neck and threatens to kill her unless the party obeys him. Enraged at her assailant, Charlie punches him, and finally causes every last spring lock in his suit to go off rapidly, sending Afton to a slow and painful end. One by one, the four animatronics approach him and drag their dying murderer into the darkness of the pizzeria to complete their revenge, with Golden Freddy finally disappearing into the afterlife.

Golden Freddy himself doesn't make an appearance in The Fourth Closet, but his endoskeleton was melded into an amalgamation that William Afton used to get a remnant from. 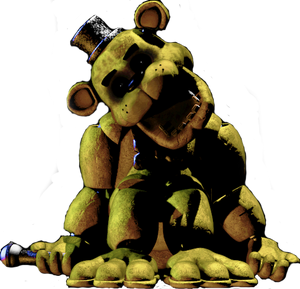 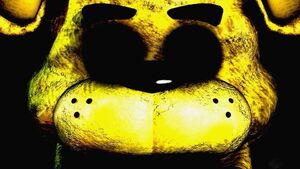 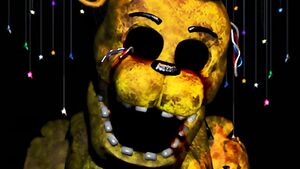 Golden Freddy with what seems to be bloodied teeth. 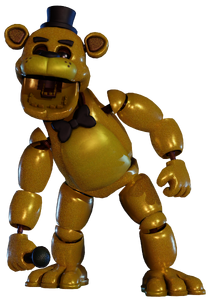 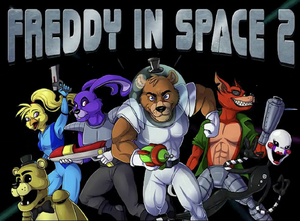 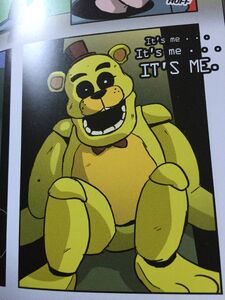 Retrieved from "https://villains.fandom.com/wiki/Golden_Freddy?oldid=4109105"
Community content is available under CC-BY-SA unless otherwise noted.