Golden Ogre is the first boss of Darius Gaiden. It also appears in a modified form as one of the final bosses. A flagship of Belser, Golden Ogre led Belser's attack against Planet Vadis, where Darius inhabitants set up a colony after escaping Planet Darius, which had been taken over by Belser's forces. Alone it annihilated an entire fleet of Silver Hawk, invading Vadis and attacking a city, where it was destroyed by two Silver Hawk. It is shaped after a ogrefish.

Golden Ogre's body is comprised of various segments, giving it high maneuverability. It can scatter metal scales and shoot bullets, as well as fire a huge beam from it's mouth. It can also use it's own body to generate wind gusts. Since it is the very first boss in the game, it's patterns are relatively simple.

One of the final bosses in the game is a palette-swap called Storm Causer, which is causing a massive storm in the middle of Planet Darius. Storm Causer is a huge upgrade over Golden Ogre, having small gun turrets all over it's body, a flamethrower and laser guns.

It is fought over the storm clouds. Upon it's destruction, the storm subsides, and Darius inhabitants are finally able to return to their planet. 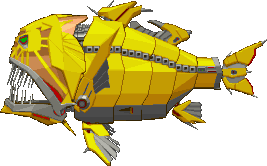 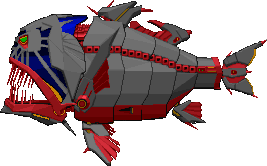 Storm Causer
Add a photo to this gallery
Retrieved from "https://villains.fandom.com/wiki/Golden_Ogre?oldid=2904625"
Community content is available under CC-BY-SA unless otherwise noted.