Collecting all treasure in Skylands

Evil Queen
The Golden Queen is the leader of the Doom Raiders, and the main trappable villain in Skylanders: Trap Team. An Earth element trap is required to trap her.

She was shown to be ruthless, willing to use the Tower of Time and all of it's inhabitants just as an example if the Skylands disobeyed her rules.

The Golden Queen did not accept failure, even the slightest inconvenience to her plans would set her off edge and cause her to glow. While fighting the Skylanders at her lair, she was overconfident and underestimated her enemy which probably led to her downfal. 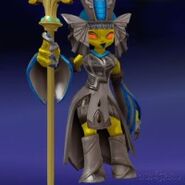 Retrieved from "https://villains.fandom.com/wiki/Golden_Queen?oldid=1222988"
Community content is available under CC-BY-SA unless otherwise noted.