Collect all treasure in Skylands (failed and later abandoned)

The Golden Queen is the leader of the Doom Raiders, and one of the 2 main antagonists and trappable villain in Skylanders: Trap Team until her capture, at which Kaos takes over again. An Earth element trap is required to trap her. After redeeming herself by joining the Skylanders prior to Skylanders: Imaginators, she is now a Sensei of the Sorcerer Class.

She was shown to be ruthless, willing to use the Tower of Time and all of it's inhabitants just as an example if the Skylands disobeyed her rules.

The Golden Queen did not accept failure, even the slightest inconvenience to her plans would set her off edge and cause her to glow. While fighting the Skylanders at her lair, she was overconfident and underestimated her enemy which probably led to her downfall.

After redeeming herself by joining the Skylanders, she lost much of her obsession with gold and considers herself mostly reformed.

With her sorcery skills she can turn anyone or anything into gold, either with a touch of her finger or a blast from her magic staff. She can also create a golden forcefield that blocks all attacks, as well as create energy rings that damage her foes. She can conjure golden butterfly-like objects that shoot bladed gold projectiles, she can even regenerate herself by absorbing gold treasures. She can even transform into a giant form when submerged in vast amounts of gold, she gains massive strength and durability in this form. In Imaginators she can create golden scarab beetles from her staff that attack her foes, as well as create powerful shockwaves of energy that turn anyone hit by it into gold, she can transform into her giant form from the waist up even without any nearby gold sources also gainin the ability to shoot eye lasers. She can even grow scarab wings and summon a huge swarm of gold scarab Beetles.

She and her follow Doom Raiders are seen at the beginning of the game, where she is laughing at her companions who are causing havoc throughout Skylands. As the Trap Team were fighting the Doom Raiders, the Golden Queen was about to turn them into gold until Wildfire used his shield to block her beam, blinding Gulper and making him fall unconscious on the rest of the Doom Raiders. She was locked up in Cloudcracker prison ever since then.

After Gulper was defeated and imprisoned, the Doom Raiders were about to turn on Kaos until the Golden Queen appeared and ordered them to stop, letting Kaos stay as long as he bare witness to her plan. She then touches a chair, turning it gold.

The Golden Queen first appears in the fourth episode of Skylanders Academy, "Dream Girls", though not in-person. She only appears as pictures and a figurine in Kaos' room.

The Golden Queen makes her first actual appearance in the series in the fifth episode, "The Hole Truth", as an inmate of Cloudcracker Prison alongside her fellow Doom Raiders, Wolfgang, Chompy Mage, Chef Pepper Jack, Broccoli Guy, and Dreamcatcher (who first joins the Raiders in the episode). She manipulates the Spyro, Eruptor, and Stealth Elf into sending her and her team to a section of Cloudcracker Prison called the hole so they can combine their powers to create a wormhole and escape. Upon realizing their mistake, the Skylanders go to the Hole themselves to attempt to stop their escape, but fail to stop them in time. 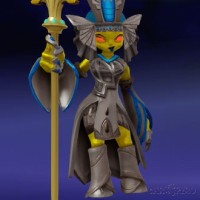 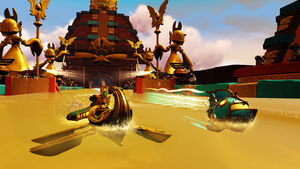 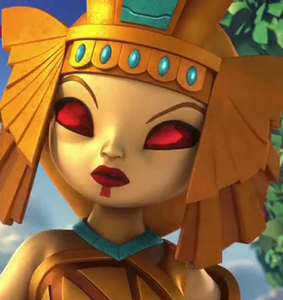 Retrieved from "https://villains.fandom.com/wiki/Golden_Queen?oldid=3078424"
Community content is available under CC-BY-SA unless otherwise noted.