Rulers of the Flat Peak Mountain
Servants of the Bull King (Doraemon: The Record of Nobita's Parallel Visit to the West)

Abuse the Earth deities at their location

The Golden Horned King (in Chinese: 金角大王) and the Silver Horned King (in Chinese: 銀角大王), originally known as the Golden Boy and Silver Boy, are two demon kings who serve as an antagonists in the 16th-century Chinese classic novel Journey to the West by the late Wu Cheng'en, and its multiple adaptations. They are two boys in charge of watching over Taishang Laojun's furnaces, who escaped to the mortal realm, and based in Lotus Cave (in Chinese: 蓮花洞) on Flat Peak Mountain (in Chinese: 平頂山). They also appears in the movie Doraemon: The Record of Nobita's Parallel Visit to the West under the names Golden Horned Ogre and Silver Horned Ogre as supporting antagonists.

Golden Horned King and Silver Horned King are typical Journey to the West demon kings who capture and eat humans who arrived at their location. They also enjoy Taoism and often doing its alchemy. Both of them are also protective towards each other, and apparently very tolerant towards their minions' failures, as when two minions revealed that they not only failed to capture Sun Wukong, but also lost the magical items, neither of the demon kings punish any of the minions, but instead switched to another plan of inviting their godmother to help. When the minions were killed, Golden Horned King mourned them, further shown the demon kings' care towards their minions.

The two Horned Kings were originally the two servant boys of Taishang Laojun, watched over his furnaces. One day, they escaped into the mortal realm, based on the Flat Peak Mountain, and proclaimed themselves to be two demon kings. Knowing Xuanzang's flesh would grant them immortality or long lifespan, they drew pictures of his party to remember when they came. They also took Laojun's five special items, the Purple Gold Red Gourd (in Chinese: 紫金紅葫蘆), Suet Jade Flask (in Chinese: 羊脂玉淨瓶), Golden Cloth Rope (in Chinese: 幌金繩), Seven Stars Sword (in Chinese: 七星劍) and Palm Leaf Fan (in Chinese: 芭蕉扇).

When Xuanzang arrived into the mountain, the Silver Horned King managed capture Xuanzang's party, and pin down Sun Wukong under three mountains. Sun Wukong escapes with the help of the mountain deities. When the Silver Horned King ordered two minions to capture Wukong using the Purple Gold Red Gourd and the Suet Jade Flask, Wukong disguised as a Taoist from the deities' realm and tricked them to give him the two items.

Angered, the two demon kings ordered two other minions to invite their godmother (a demonic fox), the Nine Tailed Vixen (in Chinese: 九尾狐狸), who was keeping the Golden Cloth Rope, to eat Xuanzang and let them borrowing the rope to capture Wukong. However, Wukong killed the two minions and then the godmother herself, and took the rope for himself, disguised as her and came to their cave. Unfortunately, due to Zhu Bajie's stupidity of accidentally revealing the Monkey King's identity, Wukong's plan failed and he was forced to fight the Silver Horned King using the magical rope, which however is only totally able to be controlled by its owners, so the rope released the Silver Horned King and tied Wukong up, and the demons retook their gourd and flask. The monkey escaped and fight the Silver Horned King once again, but was trapped into the Purple Gold Red Gourd as a result. Yet, as usual, Wukong managed to escape and took the gourd once again, replaced it with a fake one for the demon kings.

For a third time, Wukong and Silver Horned King fought. This time, due to holding a fake gourd, the demon king was unable to trap Wukong, but Wukong, holding the real gourd, managed trap him and frees Xuanzang and the others. Vowed to avenge his younger brother, the Golden Horned King led his army of demons to fight Wukong, only for the Great Sage Equal to Heaven to kill them all, save for the demon king, who escaped to the Dragon Suppressing Cave (in Chinese: 壓龍洞) on Dragon Suppressing Mountain (in Chinese: 壓龍山), the home of his godmother and her younger brother, Hu A'qi (in Chinese: 狐阿七). A'qi (who was keeping the Seven Stars Sword), wanted to avenge his sister, helped his god-nephew to kill Wukong, only to be killed by Zhu Bajie, and Wukong managed to trap the Golden Horned King inside the Suet Jade Flask. Just as they are preparing to continue on their journey, Taishang Laojun appears and tells them the demon kings' true origin, and claims back all the things Sun Wukong took from the demons and brings the boys back to Heaven.

In this version, they are called Golden Horned Ogre and Silver Horned Ogre.

Here, they are the servant of the Bull King. Like him and many other demons, they escaped Doraemon's gaming machine due to Doraemon forgot to turn it off, helped the Bull King and Queen Iron Fan in capturing Xuanzang and eating his flesh. Eventually, they were defeated and sent back to the machine by Doraemon. There is no indication of these two here being Taishang Laojun's servants. 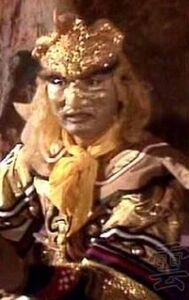 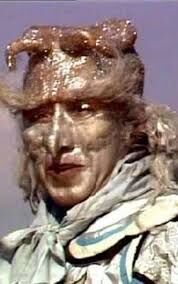 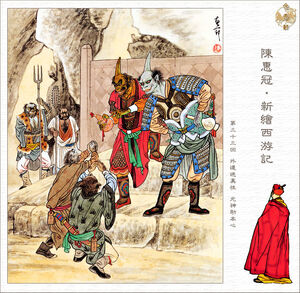 Golden (left) and Silver (right) Horned Kings in the novel.