Ability to consume anything smaller than itself

Eat everything and grow up.

The Goldfish is one of three main protagonist villain from the game Tasty Blue. It is an animal who is bought by a child from a petshop.

The Goldfish was bought by a child from a local pet store and brought to his home. Later, the child overfed him with a lot of fish foods despite it is dangerous. Later, the Goldfish grew up and escaped from the globe, enter a sewerage and went to the sea.

Later, in this sea, it ate a lot of buildings, fishes, squids, orcas, humans etc.

The original appearance of Goldfish. 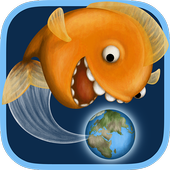 A wallpaper of the Goldfish. 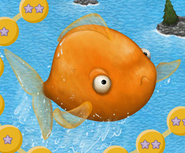 The Goldfish in the level select screen.

Retrieved from "https://villains.fandom.com/wiki/Goldfish?oldid=3560189"
Community content is available under CC-BY-SA unless otherwise noted.