The Golem is a recurring monster in the Dragon Quest series. It is a material monster that came to life thanks to a magical spell to act as a guardian of several important things or places, pretty much the same as the golem from Jewish folklore and mythology. They are characterized by its formidable stamina and defense.

This monster made its debut in Dragon Quest I where he was guarding the gates of Cantlin of any trespassers, the Hero can play the Faerie Flute to put it to sleep and have a chance against it at low levels. Other varieties of Golem exist, like the Stone Golem and the Gold Golem, which gives out a lot of money. These animated automatons act as an enemy in some games and as bosses in others, such as Dragon Quest VII where he guards The Tower, west of Ballymolloy. The moment he notices Hanlon in the party, he attacks them which proves they are also able to remember and possibly hold grudges.

Golems have also had various roles as supporting characters. In Dragon Quest VIII they can be called for battle, they are also recurring obtainable monsters in the Dragon Quest Monsters spin-offs.

He is given another major role in the alternate timeline of Dragon Quest Builders. In here, the protector of Cantlin was also its demise: When people began arguing and fighting over the limited resources the city had, the Golem realized that, to protect the city it had to rid it of its denizens. The Builder fights it as the end boss of Chapter 1 and, if Splatrick has been recruited, it is revealed by him that the brick monster had feelings towards the kingdom of Alefgard and only wanted to achieve peace, too.

A Golem appears as a Primary defense type Spirit. While powerful, he has no ability or any support slots. His Spirit Battle is a stamina battle against a giant R.O.B. with super armor and increased power to his punches and elbow strikes. 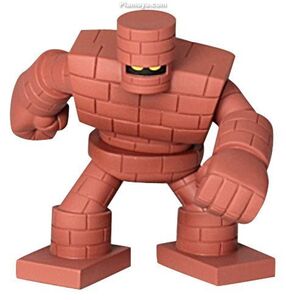 Golem vinyl figurine
Add a photo to this gallery

Retrieved from "https://villains.fandom.com/wiki/Golem_(Dragon_Quest)?oldid=3325492"
Community content is available under CC-BY-SA unless otherwise noted.