Fulfill directives of their creators.

A Golem is a magical creation that is mentioned in Jewish folklore - said to be created by those who know the secrets of mysticism, these beings are not flesh and blood but rather clay, stone or other inanimate objects magically given a life force to move and are said to be almost mindless servants. So any inanimate objects that was given a life force to move on their own under instructions they are considered Golems. Golems however, could become dangerous and unpredictable, often to the point they had to be destroyed in order to stop them from rampaging - this is seen as an example of hubris: in which the creation of a Golem is seen as an affront against nature and the subsequent problems are seen as punishment for such arrogance. Anyway, due to their lack of intelligence, their masters have to give them very detailed and specific instructions about what to do. Otherwise, these clumsy giants could make dangerous mistakes.

Golems' negative image has to do with the emergence of Christianity: in Christianity only two beings can give life: The almighty and the Devil. Creation of Golems were viewed as devilish. And due to the fact that at the time of Golems' folklore magics are considered to be evil by Christians and anti-semitism were pervasive in Europe reinforced these bad preceptions of Golems. Inevitably, Golems' positive image as a holy magic of creation disappeared, and negative images of Golems became prevalent.

This Golem is the oldest known Golem that was created by Rabbi named Eliyahu (the Prophet Elijah). While the incredible works that it undertook at Eliyahu’s bidding however, the Golem would never stop growing and he became afraid of it. Eventually the Golem grew to the point that it covered the world and its mobility, big or small, became threat to life forms below it. So Eliyahu removed a magical scroll in its forehead, thus reducing it to rubble.

The most famous Golem in folklore is the Golem of Prague and ever since the legend became widely spread Golems have become popular figures in fiction, sometimes as antagonists but more often as servants to a higher evil (or misguided "hero"). 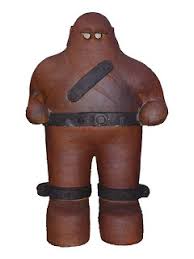 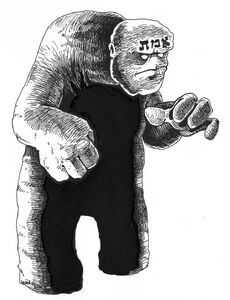 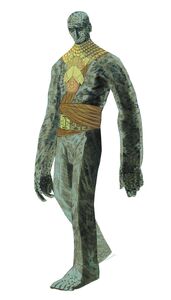 Add a photo to this gallery
Retrieved from "https://villains.fandom.com/wiki/Golem_(folklore)?oldid=3481575"
Community content is available under CC-BY-SA unless otherwise noted.