Golem Bomber is an antagonist in the Bomberman series. He is a member of the Five Dastardly Bombers.

Golem Bomber acts as the boss of World 2-7. He utilizes powerful bombs, but is very slow-moving and can sometimes harm himself due to his inability to escape his own bomb blasts.

After being defeated the first time Golem Bomber gets into his giant robot suit and acts as the boss of World 2-8.

Golem Bomber's machine is a floating fireball-spewing monstrosity but is not terribly hard to defeat, especially since Golem Bomber is not immune to his own fireballs and can be tricked into blowing himself up.

After being defeated for a final time Golem Bomber is seemingly destroyed when Bomberman blows up his area and moves on to deal with the other villains of the story.

Golem Bomber returns in the PC port of the game, fighting alongside Pretty Bomber.

Golem Bomber returns in this game to fight in the Bomber Convention, befriending a girl named Mami. He joined the tourney to help save her ailing mother.

Golem Bomber returns with his team of goons in Bomberman Tournament. He is fought in the Golem Base, and uses the Karabon SeaWing to transform into GolemGhost.

Golem Bomber is fought on World 2: Planet Timbertree. First rusted and downed, he awakened by Yellow and White. He begins an on-foot fight, but then switches to his Fort Walker when the going gets tough. After being defeated, Yellow makes him an offering of peace with paper and flowers in his hands.

After Buggler makes his black hole, he is fused along with his teammates into the Great Gattaida. After this fails, he then joins forces with Bomberman to defeat him.

Golem Bomber is a rusty golden-orange body with green moss on his shoulder. He has a monitor face and a big skull bomb marking on his belly.

Golem Bomber acts as the muscle behind his team. Even though he is mostly silent and slow, he is quite physically powerful. He is also shown to enjoy nature. 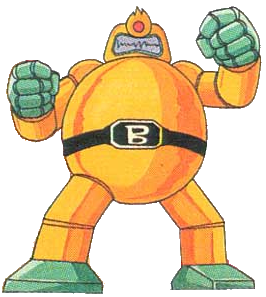 Golem Bomber's design in Super Bomberman 2.
Add a photo to this gallery

Retrieved from "https://villains.fandom.com/wiki/Golem_Bomber?oldid=3825994"
Community content is available under CC-BY-SA unless otherwise noted.