The Golem of Prague is a popular folkloric monster that is one of the world's most famous stories involving the mystical Golem of Jewish legend. It is also one of the tales most often told when warning others of the dangers of creating a Golem since they are notoriously hard to control.

The most famous version of the story involves Judah Loew ben Bezalel, the late 16th century chief rabbi of Prague, also known as the Maharal, who supposedly created a Golem to defend the Prague ghetto from anti-Semitic attacks and pogroms. Depending on the version of the legend, the Jews in Prague were to be either expelled or killed under the rule of Rudolf II, the Holy Roman Emperor. To protect the Jewish community, the rabbi constructed the Golem out of clay from the banks of the Vltava river, and brought it to life through mysterious rituals dating back to the earlier legends. As the Golem grew it became increasingly violent, killing at will and spreading fear. A different story tells of how the Golem fell in love, and when rejected, became the violent monster seen in most accounts. Some versions have the golem eventually turning on its creator or attacking other Jews.

The Emperor begged Rabbi Loew to destroy the Golem, promising to stop the persecution of the Jews. To deactivate the Golem, the rabbi rubbed out the first letter of the word "emet" (truth or reality) from the creature's forehead leaving the Hebrew word "met", meaning dead. The Golem's body was stored in the attic genizah of the Old New Synagogue, where it would be restored to life again if needed. According to legend, the body of Rabbi Loew's Golem still lies in the synagogue's attic. Some versions of the tale state that the Golem was stolen from the genizah and entombed in a graveyard in Prague's Žižkov district, where the great Žižkovská tower now stands. A recent legend tells of a Nazi agent ascending to the synagogue attic during World War II and trying to stab the Golem, but he died instead. The attic is not open to the general public. 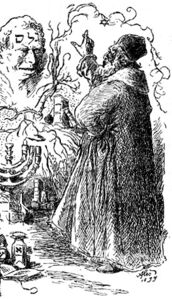 The Golem
Add a photo to this gallery
Retrieved from "https://villains.fandom.com/wiki/Golem_of_Prague?oldid=3889562"
Community content is available under CC-BY-SA unless otherwise noted.