Golemon is an villain Digimon in the anime Digimon Adventure 02 and Digimon Frontier.

Golemon is a Champion Level Digimon that resembles the folklore monster, Golem. In Digimon Frontier, the only word he said was, "Master."

Golemon first appeared when he was created from a Control Spiral by Arukenimon. He was off to destroy a dam that will flood the entire town. Golemon easily wiped out Palmon, Mimi's Digimon partner, while she tried to escape from Golemon's grasp. Mimi then called for help and Davis and the others came to her rescue by Digi-porting to the Digital World. The Armor Digimon tried to stop Golemon, but they were no match for the monster. Hawkmon Digivolved to Aquilamon and joined Stingmon and to finish off Golemon.

Grumblemon brought a Golemon to life by summoning him with magic. He was destroyed by BurningGreymon, forcing Gigasmon to retreat. Later, Grumblemon summoned an army of Golemon to attack the Digidestined, but were easily wiped out by them. The last Golemon was destroyed along with Grumblemon by MetalKabuterimon.

This Mineral type Digimon was born from an investigation of ancient curses. Ancient spells are carved on its back, it protects itself by producing a hot gas. Approximately nine tenths of its body is made of stone data. Unless it is ordered, it will not move. 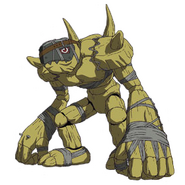