To defeat the Avengers (formerly; failed).

Brutal Supervillain
Erik Josten, also known as Atlas and Goliath, is a supervillain from Marvel Comics and an enemy of the Avengers.

Sometimes, even a villain has identity problems. Erik Josten was a rogue AWOL marine who was employed by Captain America's old adversary, Baron Heinrich Zemo as a henchman. When Zemo was killed during his final battle with Captain America, Josten stumbled across the lab where Wonder Man was created, and was talked into undergoing it by Thor's nemesis, the Enchantress. The ionic radiation turned Josten in a superhuman criminal named Power Man, who easily defeated the Avengers in their first battle, but was defeated by Captain America in their second battle.

After doomed memberships with the Swordsman, the Masters of Evil, and the Lethal Legion, Josten was defeated by Luke Cage in a battle for the name "Power Man", and was later tricked into joining a second Lethal Legion by Count Nefaria, only to have a large portion of his powers stolen. He reemerged as "the Smuggler", and was defeated by Spider-Man. He later underwent a process that gave him the power to increase his size, and took the name "Goliath", and fought the Avengers, the West Coast Avengers, and Spider-Man. He later rejoined the Masters of Evil when they posed as a team called the Thunderbolts. But Josten liked being a superhero, and along with his fellow members, turned on the second Baron Zemo, and continue with their superheroic lives to this day.

Originally, Josten had super strength and invulnerability, and later got the power to increase his body size. 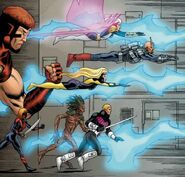 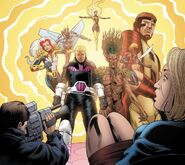 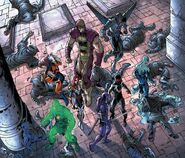