Defeat David and the Isrealites (failed).

He was voiced by Phil Vischer.

Goliath first appears when two of the Phillistines, Jean Claude and Christophe call him. The Isrialites were so terrified of Goliath that they all ran away and hid. Goliath then said he will come back again, and of course, he came back the next day, for 40 days. Meanwhile, Jesse (Pa Grape) started worrying about his sons, Jimmy, Jerry, and Tom, so he sent his youngest son, David/Dave (Junior Asparagus) to go to the battle field to send some food for them.

Dave arrives at the battle camp, but realizes that no one is there. He asks if anyone is here, which Jimmy Gourd shushes him, because Goliath will hear him. Dave gave his brothers the food he brought for them, but was surprised that none of them would fight Goliath. He asked them if they forgot that they are the children of God. It turns out they did forget, because they seem to be so scared of big, tall Goliath, that they forgot that God was even bigger.

When Goliath sees nobody will fight once again, he starts to turn away, but before he did that, he told the Isrialites that the "Children of God" were cowards. Dave became angry and couldn't believe his brothers were letting Goliath say that about God. He decided that he will fight Goliath.

Goliath then sees that Dave will fight him, he makes fun of Dave and his God. Dave then yells that he's sure that God shall help him defeat Goliath. The two started fighting. Goliath takes out his boxing gloves and hops to fight Dave. Dave was getting nervous, but he knew he has to do what God wants him to do, so he hops to fight Goliath.

Dave pulls a stone he got from a stream and started turning it around and around with a slingshot. He threw it just at the right time, and the stone hits Goliath in the head. He then fell down to the ground, almost to squash Dave. But Dave successfully got out of the way, and Goliath hit the ground, dead.

Goliath is forceful, energetic, aggressive, antagonistic, argumentative, and competitive. He is very formidable, tough, powerful, and persuasive when he challenges the Israelites to see if anyone could defeat him. He is also shown to be rebellious, influential, and authoritative. Goliath also appears to be much stronger than any of the soldiers in Israel's army. 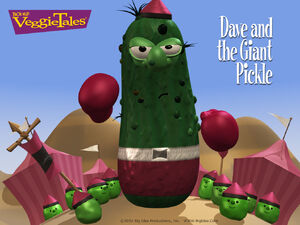 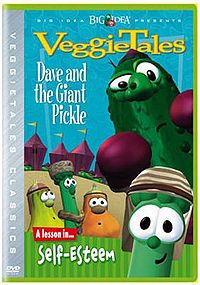 Goliath on the Dave and the Giant Pickle DVD wallpaper, along with Jimmy and Jerry Gourd, King Saul(Archibald Asparagus)and David(Junior Asparagus).
Add a photo to this gallery

Retrieved from "https://villains.fandom.com/wiki/Goliath_(VeggieTales)?oldid=2945439"
Community content is available under CC-BY-SA unless otherwise noted.