These Grimm bear much resemblance to modern day African Elephants. They have a primarily black body, with giant, white tusks, and a white and red patch on their foreheads. Like most Grimm, they have bony, white protrusions on their bodies, with a massive row of them going down their spines.

The Goliath is one of the largest land-based Grimm seen yet, standing at 20 stories tall at the shoulders. They also seem to travel in herds, as seen in Search and Destroy.

In Search and Destroy, Goliaths appear during the latter half of the episode, in which Bartholomew Oobleck and Ruby Rose observe a herd walking around the abandoned city of Mountain Glenn. Oobleck states their lack of hostility, due to their learning of the consequences of human conflict.

Yet despite this unusual display of restraint, Goliaths still never seem to stray far from the Kingdoms' borders. When Ruby asks why, Oobleck simply states that they're "waiting"; however, what exactly they are waiting for is currently unknown. One member of the herd appears to notice Oobleck and Ruby, glaring at them for a short period of time before rejoining its herd.

In Fall, Goliaths are among the Grimm noticing the negative emotion from Amity Colosseum and turn their attention towards Vale.

In PvP, a few Goliaths travel through Mountain Glenn's streets towards the city of Vale's immediate borders.

In End of the Beginning, Goliaths are seen entering the ruined Beacon Academy in the aftermath of the battle.

These Grimm's abilities are currently unknown; however, it is known that they possess great power (to the point where even shots from a sniper rifle would be only a minor irritation) and a greater intelligence than the average Grimm (learned over the span of hundreds of years), as they stopped attacking humans once they figured out that repeated attempts to kill them resulted only in death.

A Goliath heads toward Beacon Academy. 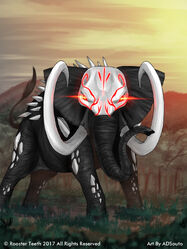 A Goliath Grimm card for the board game RWBY: Combat Ready.