intelligence ,Knowledge of the paths to Mordor

Obtain the One Ring.

Gollum, originally known as Smeagol (or Trahald), was a creature of Hobbit-like origin.

The name Gollum was derived from the disgusting gurgling, choking cough he made. His birth can be estimated to have happened in the year TA 2430 His death date is given as March 25, 3019. His life was extended far beyond its natural limits by the effects of possessing the One Ring. At the time of his death, Smeagol was about 589 years old, a remarkable age for a creature that was once a Hobbit, but he had been deformed and twisted in both body and mind by the corruption of the Ring. His chief desire was to possess the Ring that had enslaved him, and he pursued it for many years after Bilbo Baggins found it while walking in the Misty Mountains in the book The Hobbit.

In the films he is portrayed by Andy Serkis.

Early life and and aquiring the Ring

Originally a Stoor Hobbit, Sméagol spent the early years of his life living with his extended family under a Matriarch, his grandmother.

Around the year TA 2463, Sméagol became the fourth Bearer of the One Ring, after Sauron, Isildur, and Déagol. Déagol was his cousin, and on Sméagol's birthday, they went fishing in the Gladden Fields north of the mountains. It was there that Déagol found a gold ring, after being pulled into the water by a large fish. Sméagol demanded the ring as a birthday present and strangled Deágol to death, when he refused. Sméagol was quickly corrupted further by the ring and, banished by his people, was forced to find a home in a cave in the Misty Mountains in around TA 2470. The Ring's malignant influence twisted his Hobbit body and mind and prolonged his life far beyond its natural limits. He called it his "Precious" or his "Birthday Present," the latter as a justification for killing Déagol.

Living in the Misty Mountains

He lived in the Misty Mountains for over four hundred years, living on raw blind fish (which he caught from his small row boat) and Goblins when he could get them. Indeed, he made a song about raw fish, that he uses as a riddle to Bilbo and much later sings to Frodo in a longer version. In later years, he found Hobbit and Elven food repulsive.

During his centuries under the Ring's influence, he developed a sort of dissociative identity disorder: Sméagol, his "good" personality, still vaguely remembered things like friendship and love, while Gollum, his "bad" personality, was a slave to the Ring and would kill anyone who tried to take it. Years later, Samwise Gamgee would name the good personality "Slinker" (for his fawning, eager-to-please demeanor), and the bad personality "Stinker". The two personalities often quarreled when he talked to himself (as Tolkien put it, "through not having anyone else to speak to") and had a love/hate relationship, mirroring Gollum's love and hatred for the Ring and for himself.

In July, TA 2941, during the Quest of Erebor, the Hobbit Bilbo Baggins stumbled upon the subterranean lake on which he lived and found Gollum's Ring. Gollum had lost the Ring while following an imp goblin in the network of caves leading to the lake, though in fact it is more proper to say that the Ring abandoned Gollum, for it was known to have a will of its own. As Gandalf says later, it looks after itself, trying to get back to Sauron. After the infamous Riddle Game, during which Gollum was unaware of his loss, Gollum refused to show Bilbo the promised way out and plotted to murder him. When he went to get his "birthday present," however, he found that it was gone. He suddenly realized the answer to Bilbo's last riddle—"What have I got in my pocket?"— and flew into a rage. Bilbo inadvertently stumbled across the Ring's power of invisibility as he ran, allowing him to follow Gollum to the back entrance of the cave. There, Bilbo at first thought to kill Gollum, but was overcome with pity, so he jumped over him to escape. As Bilbo ran, Gollum cried out, "Thief! Thief, Baggins! We hates it forever!"; he did not immediately follow Bilbo out of fear of being caught by the goblins, and so lingered in his cave.

Search for the Ring

Gollum eventually left the Mountains and pursued Bilbo a few years later, but the trail was cold. He made his way south into Mordor where all evil was being drawn at the time, discovering the secret stair located near Minas Morgul and surviving an encounter with Shelob. He was captured on his return and taken to the enemy's stronghold and forced to reveal under torture what he knew about the Ring. Gollum was then strangely freed, as he shows no particular loyalty towards Sauron, but caught by Aragorn, then interrogated by Gandalf, who placed him in the care of the Silvan Elves living in Thranduil's kingdom in Mirkwood. Assisted by orcs he escaped them, and set off looking for the Shire. He passed through Moria, but could not make it out of the East gate. Seemingly he then just waited there until he got lucky when the Fellowship passed through. However, as Frodo was a ring-bearer he might have foreseen the passing of the ring. Alternatively, some of Saruman's or Sauron's spies may have revealed to him the Fellowship was heading towards Moria.

The War of the Ring

Gollum met and started following the Fellowship of the Ring in Moria, and was spotted and heard by Frodo on several occasions. On January 15, 3019 the Fellowship was divided when Gandalf disappeared while fighting a Balrog (though he later returned). Gollum continued trailing the remaining members. It is unknown how he crossed the Bridge of Khazad-dûm, but he came with them to Lórien without their knowing. Gollum followed their boats down Anduin (floating on a log) to Rauros and pursued Frodo and Sam across the Emyn Muil when they struck out on their own towards Mordor. Gollum followed them, but after a confrontation (in which he bit and nearly strangled Sam) Frodo subdued him. Frodo tied an Elven Rope around Gollum's ankle for a leash, but the mere touch of the rope pained him. Taking pity on the wretched creature, Frodo made Gollum swear to help them. Agreeing to the oath, Gollum swore by the "Precious" itself and Frodo released him. The unlikely company, guided by Gollum, made its way to the Black Gate, the entrance to Mordor.

Along the way it was revealed that Gollum, having lived in a cave for hundreds of years, feared both the sun and the moon, calling them the 'Yellow Face' and the 'White Face', respectively.

Frodo's kindness brought out the "Sméagol" personality, and he made at least some effort to keep his promise. The two had a strange sort of bond from both having been Ringbearers; in Gollum, Frodo saw his possible future, and so wanted to save him so he could save himself. Apart from Gandalf and Bilbo, Frodo is the only person known to have shown kindness towards Gollum, who is hated instantly by everyone he meets, being perceived as filthy, slimy, sneaky and suspect by groups as different as the orcs of Cirith Ungol and the Rangers of Ithilien.

When the Black Gate was reached and found to be well guarded, Gollum convinced them not to go that way, saying that they would be caught and Sauron would regain the Ring. Gollum said he would lead them south, where he knew of another entrance into Mordor.

Frodo and Sam were caught by Faramir, and Gollum followed them. When Frodo allowed Faramir to briefly take Gollum prisoner, however, he felt betrayed, allowing the "Gollum" personality to take total control. Faramir found out that the place Gollum was taking them was called Cirith Ungol. He then warned Frodo and Sam of the evil of that place.

Frodo, Sam, and Gollum left Faramir and began crossing the pass of Cirith Ungol in the border-mountains of the Ephel Dúath (Mountains of Shadow). Gollum visited the great spider Shelob, child of Ungoliant, because he was planning to betray the Hobbits to her and then get the Ring for himself. That Gollum managed to forge an alliance with Shelob is also remarkable, as she was otherwise known for devouring and killing everything on sight. When he returned the Hobbits were asleep. The sight of Frodo sleeping nearly moved Gollum to repent. However, Sam woke up and spoke harshly to Gollum, and all hope of redemption was lost. Gollum followed through with his plan and led Frodo and Sam into Shelob's Lair.

Just as Frodo warned him, Gollum's betrayal of his oath ultimately led to his undoing, for Frodo and Sam escaped from her lair. They came against all odds to the fiery volcano Mount Doom (Orodruin). Gollum followed them all the way, seeking a chance to surprise them and take the Ring. When Frodo and Sam had almost reached their destination, he attacked, but failed to get the Ring. Sam, who had hated Gollum on sight, tried to bring himself to kill him, but relented out of sheer pity and disgust, turning his back on the beaten (but still wily) creature.

Moments later, Frodo was standing on the edge of the Crack of Doom, but, unwilling to destroy the Ring, claimed it for himself and put it on. Then Gollum attacked the hobbits again. Gollum knocked out Sam whilst Frodo was invisible. But Gollum was able to track his footprints and jumped on Frodo. The two fought and finally Gollum bit off Frodo's finger.

Here Bilbo's long-ago kindness in sparing Gollum's life was rewarded, for Gollum then teetered on the edge of the great pit, lost his balance and fell in, (In the movie Frodo pushed him in.) taking the Ring and finger with him along with a final cry of "Precious!" He was then burned in the molten magma and the Ring was destroyed with him. Had Gollum not lived to play this final part, there was a good chance that Sauron would have regained his Ring, as he knew where Frodo was as soon as he put it on. 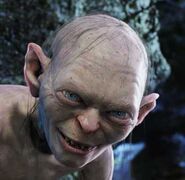 As seen in the Rankin/Bass version of The Hobbit.

As seen in Ralph Bakshi's Lord of the Rings.

As seen in the Rankin/Bass version of Return of the King.

Gollum in The Hobbit: An Unexpected Journey. 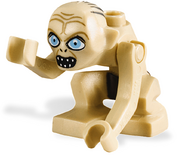 Lego Gollum
Add a photo to this gallery
Retrieved from "https://villains.fandom.com/wiki/Gollum?oldid=995309"
Community content is available under CC-BY-SA unless otherwise noted.