The Golums, also known as the Golum Gang, are minor antagonists of Batman & Robin. They were a gang of criminals living in Gotham City.

The Golum Gang Leader was portrayed by Doug Hutchison.

They resided in an abandoned building called Turkish Baths.

The Golums first appeared when they were drinking and laughing when their lair was broken into by Bane and Poison Ivy when they discovered it. The Golums took out their weapons (which were neon chains) and started spinning them.

The Golum leader took notice of Ivy, and said hello while calling her his “little pretty, pretty, pretty,” to which she replied “Hello yourself” with an amused smile (of sorts).

When he added that she looked good enough to eat, Ivy, sensing a challenge coming from him, said “That I am” (as her way of agreeing with him). With that, she set down a challenge of her own, telling the leader “Come and get me — if you can” before activating Bane's pump.

The Golum Leader then said “With pleasure” before clapping his hands. The Golums then started their attack by spinning their chains and wrapping Bane's arms with them, causing him to growl, while Ivy giggled.

Bane then stomped his foot on a wooden plank that all the Golums and leader were standing on, and all of them flew across the room and landed on the exit steps.

Bane turned his head, growling, but the leader and Golums abandoned the fight and fortress and ran away. 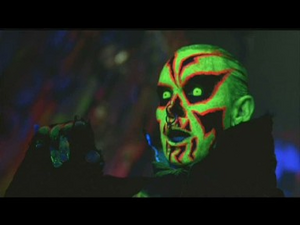 Retrieved from "https://villains.fandom.com/wiki/Golums?oldid=3977017"
Community content is available under CC-BY-SA unless otherwise noted.