Gomorrah is an antagonist turned protagonist in the Bayonetta series. He is a draconic demon who is one of Bayonetta's summons.

Gomorrah is summoned as the Climax Attack of Beloved, appearing behind the giant angel and snapping it up in its massive jaws. The demon proceeds to repeatedly bite down on the unfortunate warrior, before completely obliterating it with a final powerful chomp.

It is later summoned against Father Balder, attempting its usual attack on the Lumen Sage. Unfortunately, Balder is able to counter Gomorrah's assault by jamming its jaws with a sphere of energy. He proceeds to exit the orb and smash Gomorrah's mouth shut on it, finishing off the wounded demon by breaking its neck.

However, the demon survived as he is shown being summoned by Bayonetta in Bayonetta 2 to finish off a new enemy in a similar fashion to the first game. However, the portal fails to close and Gomorrah seizes the chance to escape and attack Bayonetta. Jeanne pushes her out of the way but in the process gets her soul knocked out of her body. She is then subsequently dragged down into Inferno as Bayonetta fights against her former demonic ally. As the long battle comes to a conclusion, Bayonetta summons a new demon and uses it to smash Gomorrah into the ground. Both demons vanish and Gomorrah's fate is unknown.

In all current Super Smash Bros. titles that Bayonetta has appeared in, Gomorrah has appeared in Bayonetta's Final Smash, Infernal Climax. Here, after Bayonetta successfully deals enough damage in Witch Time, a cutscene is trigged where Gomorrah will appear from a portal to rapidly chomp its foes before devouring them and delivering a final roar. The player being able to mash the attack button to deal extra damage in this final phase, and if any character reaches over 100% damage during the attack, they are instead instantly defeated.

In Super Smash Bros. Ultimate, Gomorrah appears as a Advanced-rank Attack-type spirit that gives the user no effect on use. In its spirit battle, the player must fight a Bayonetta on Umbra Clock Tower, with the player being able to suddenly receive damage and Bayonetta eventually gaining a free Final Smash to use as well. 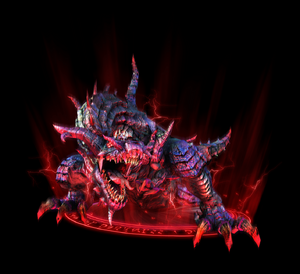