Gonard a supposed herald and an antagonist from the French cartoon Wakfu, who visits Yugo and his friends during their stay at Xav the Baker's home, informing them of a gold-robbery crime wave.

He is voiced by Eric Meyers (in English dub).

Gonnard displays a herald's knowledge, seeming to know much about their adventures up to the point that he makes contact with them, but turns out to be an absorbent genie, whose body's substance becomes whatever he eats, and was responsible for the crimes. He is defeated when Ruel tricks him into eating chocolate coins.

But scarcely have they gone out, that they come face to face with Gonard, a herald. Is a sort of specialized factor in transporting important information, he is aware of all the latest news. He had already heard of what had happened at the Miss Ugly Princess and he also knew the latest gossip and the mysterious disappearances of fortunes in several large cities.  Goes to the safe room which is located under the house of Ruel. Once in the vault he noticed with relief that nothing had been touched. The room is always filled with a mountain of gold that strongly recalls the Giant Safe of Scrooge. As he prepares to leave, Ruel comes face to face with Gonard. He can not explain how he was able to arrive here avoiding all the traps.

Gonar dhas played enough with Ruel, now he wants to finish it, but against all expectations, his body is transformed into chocolate. During his last attack, Ruel did not send him normal Kamas, he sent him the Kamas in chocolates that had been made by Xav. Genius begins to melt and shrink, unable to maintain a solid consistency. He begs Ruel to help him because if he continues to soften, he risks dying. Ruel looks at him and says, "We do not touch the family treasure of an Enutrof," the genius repeats the sentence and Ruel consents to save him. He puts it in a firmly closed bottle that he leaves in the middle of the kamas in the room of the chest. 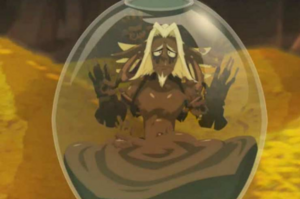 Gonnard into a chocolate genie
Add a photo to this gallery

Retrieved from "https://villains.fandom.com/wiki/Gonard?oldid=3703162"
Community content is available under CC-BY-SA unless otherwise noted.