Waiting for people to open their house doors and find it.

The Good Boy is a mysterious dog-like creature that was created by the Canadian horror artist, Trevor Henderson for his mythos. This monster originated from a post in 2018.

This so-called "Good Boy" is a dark dog-like creature. His legs are long and his feet end in stubs and he also has pointy ears. His most notable feature, however, is his face, which has two pure white eyes and a toothless and lipless wide-open mouth. His name being scribbled out in the second post about him implies his alignment to be evil. The caption of the first photo of the Good Boy implies that it can remain unseen somehow, as the person who took the photo commented that it wasn’t in the image when they took it. Despite his name, Trevor has stated that he's not a dog.

Not much is actually known about this mysterious dog-like creature. The caption for his original photo suggests that it enjoys wandering in random places (the description suggests this place could be a hotel or residential area), stopping by each door to carefully listen and wait for someone to open the door. It is unknown why it does this; if this is some sort of hunting tactic, or if it is simply just curious. None of its goals are currently known right now. 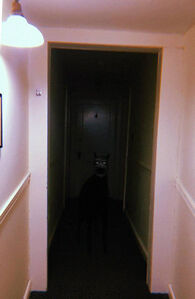 The original image of the Good Boy. 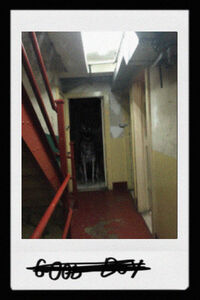 A polaroid image of Good Boy (note that the name is crossed-out below the image, which suggests Good Boy being a villain.).
Add a photo to this gallery

Retrieved from "https://villains.fandom.com/wiki/Good_Boy?oldid=4370908"
Community content is available under CC-BY-SA unless otherwise noted.