Founder and leader of the Mercy Cult

Recruiting followers for the Mercy Cult on the NFFA's behest.
Practicing "The Giving" as means of making disposable people "martyred".
Preaching "The Indivisible"/"The Invisible".
Seeking to make the world a better place for all.

Purify people through making them victims of The Purge.

Good Leader Tavis is the name of a somewhat sincere but dangerously zealous founding figurehead of a small but growing modern-day suicide cult called the Mercy Cult (though they do affectionately and religiously called themselves the "Givers") sacrifice themselves during The Purge which they devoutly called "The Giving", believing that the act they ceremoniously perform every year will benefit them and others in a near-future dystopic United States of America. She is one of the antagonists the anthology horror TV series The Purge based on the sci-fi action horror movie franchise The Purge serving as the central antagonist in the first season. A U.S. Marine named Miguel Guerrero pursues Tavis' blue bus in an attempt to save his sister Penelope from the cult group and their reigning "prophet" before it was too late.

She was portrayed by actress Fiona Dourif, daughter of legendary actor Brad Dourif best known for his voice of Chucky in the Child's Play film series.

What is known about the enigmatic woman Tavis, commonly known as Good Leader Tavis, was that she worked as a social worker at Kantrow Rehabilitation Facility in New Orleans, Louisiana. She was also hired by the NFFA to establish and lead the Mercy Cult at the behest of the said ruling civic cult who believes that drug addicts and alcoholics as well as poverty-stricken people were disposable for the sake of America's economic health.

This alternative religious movement (preferred to as a religion by Tavis and her devotees) was used for her to recruit young people, and brainwashed them with unusual religious views, so these Givers, under their "Good Leader" and under her "guidance", would sacrifice their lives for Purgers, believing it was a sacred duty and it earns them martydom via acceptance into what she and the Mercy Cult called "The Invisible" and/or "The Indivisible" (two names, including one referring to God, for what many called "Heaven") and a positive afterlife.

On the 10th Annual Purge (in the year 2025 A.D.), Good Leader Tavis led a group of chosen Givers to sacrifice their lives, but her plan failed after the truth was uncovered by one of the formerly chosen Givers, "Sister" Penelope, a former drug addict who with a same tragic past as her brother Miguel Guerrero due to the double homicide of both their parents on a Purge Night when they were children. Tavis was eventually gunned down and killed alongside her bus driver Sam by Joseph "Joe" Owens, a preppy factory wielder with a somewhat hard knock life since his high school was turned into hell by a young bully named Charles "Kick Charlie" Kiek at Thomas Palne High School in the year 2002 where Joe (also once nicknamed "Joey") finally purged him there after many years.

The Mercy Cult was ultimately disbanded after the death of Good Leader Tavis herself.

Although a mystifying figure, Tavis herself is a very adored, charismatic cult leader. Appearing to be apathetic, but unorthodox, she dispenses blessings to her fawning followers. 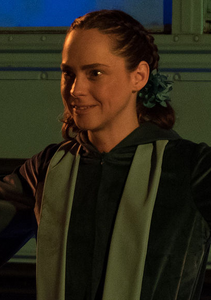 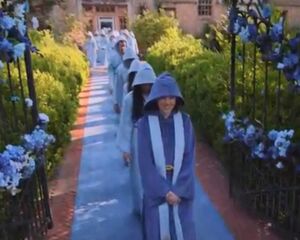 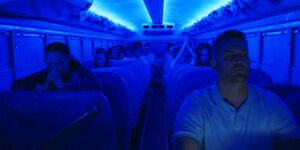