The Goozim is a hostile monster that appears in the Disney Channel hit series Phineas and Ferb. It is a large, hairy brown monster that is known to reside in Drusselstein. It would later appear as a supporting antagonist in the 2011 TV film Phineas and Ferb the Movie: Across the 2nd Dimension as 2nd Dimension Heinz Doofenshmirtz's pet and executioner to enforce his family's dictatorial rule in their Tri-State Area.

It was voiced by Dee Bradley Baker, who also played Perry the Platyborg, Dr. Diminutive, the Spider-Monkey, the Corn Colossus of Juatchadoon, Pinky the Chihuahuaborg, Candace's Id, and Derek.

In the TV film, the Goozim was used to execute most, otherwise all of the 2nd Dimension Doofenshmirtz family's enemies, and it appears that 2nd Doofenshmirtz only uses the Goozim to execute his family's enemies to entertain himself. He also plays a game similar towards poking the Goozim with a stick, with several differences: the game occurs while surrounded by a hot lake of lava and it requires several Norm Bots to poke it with multiple spears.

In the film, 2nd Doofenshmirtz attempts to have the original Phineas, Ferb, Perry, Candace, and even the original Heinz Doofenshmirtz to be fed to his Goozim, but was foiled by the arriving 2nd Candace, who tossed in a remote (that can open a new portal to another dimension) to Phineas before she was caught by several Norm-Bots. As a result, the five fall through a portal to another dimension, and the Goozim follows along. However, it loses its limbs and much of its fur to the lava in the process, so that it could not catch them. Though the Goozim survived the drop, it fearfully scatters away from the five after looking at itself in its current state, never to be seen again. 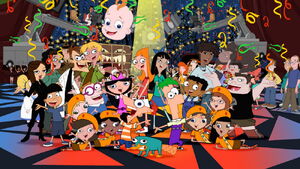 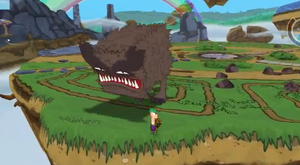 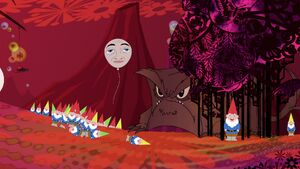