Makuta of Tren Krom Peninsula
Mistress of the Acid Falls

Member of the Makuta Strike Force

Serving Makuta Teridax.
Fighting.
Torturing and killing her victims.
Killing anyone who opposes the Plan.

Assist Makuta Teridax to overthrow Mata Nui and take over the Matoran Universe.

Eliminate anyone who opposes the Plan.
Killed the Toa Nuva and their allies. (all failed)

Gorast is the major antagonist that appeared in the BIONICLE franchise and also serves as one of the secondary antagonists in the Karda Nui arc. She was a Makuta of the Tren Krom Penisula and a member of the Brotherhood of Makuta as well as the Makuta Strike Force.

In the animated show, she was voiced by Jean Louisa Kelly who also voiced as Waspix in Hero Factory: Savage Planet.

Gorast and the other Makuta were created by the Great Beings, using the substance known as the Antidermis and came into being. Later, she became a member of the Brotherhood of Makuta, whose task was to manage the Matoran universe population by creating various Rahi.

80,000 years later; when the Brotherhood of Makuta learned that the Barraki and the League of Six Kingdoms  were attempting to overthrow the Great Spirit Mata Nui, they immediately rallied their army as Gorast, Antroz, Vamprah and Bitil led their army to attack the Barraki fortress. During the attack, Gorast fought with Carapar and Mantax and easilt defeated them.

Following the League's defeat, Gorast and Mutran were assigned by Miserix to journey to the Barraki fortress again to clear out the mess. When they got there and although they found nothing left there, Gorast immediately spotted a few stragglers and hunted them down before eliminating them.

Following the end of the Matoran Civil War, Gorast was assigned to supervise the Tren Krom Penisula as she was eventually feared by the denizens there as ahe was shown torturing and killing her captured enemies.

When Makuta Teridax demanded a Convocation to reveal the plan and claim leadership, Gorast was one of the first to side with him. After Teridax took over the Brotherhood as its new leader of overthrowing Miserix, she and Icarax were ordered to eliminate all of the Makuta who opposed the Plan and sided with Miserix, as she fulfilled her duty of executing them without hesistation.

Later, Gorast and the other Makuta evolved beyond the need of physical body as their Antidermis became gaseous within their armors.

Sometimes later, Gorast witnessed a fight between Mazeka and Vultraz on the Tren Krom Peninsula

Gorast was present during the moment that Mata Nui was awakening. When Krika appeared to warn the other makutas that Teridax would soon dispose of them, Gorast raged and fiercely clashed against Krika, finally killing him by inverting his mask power of repelation onto his own body.

Gorast is a fearsome, psychotic, hot-blooded, aggressive, and brutal Makuta. She was fanatically loyal to her master, Makuta Teridax since she was the first to sided with him during his takeover and when Teridax ushered the Plan, she was very confident that his plan will succeed.

She also did not care about the other Makuta and their well-being as she cared about serving Teridax and idolizing him for his cunning and ruthless role as she was willing to eliminate anyone, especially the other Makuta and even her enemies who questioned the Plan or opposing her master's plan, making her one of his most brutal enforcers. The narrator also states that she rules the Matoran Universe alongside Teridax after the Plan succeeded while watching the lands burn and hearing her victims' screams, which indicated that she was also cruel and sadistic.

Eventually, her blind loyalty became her downfall as Teridax eventually betrayed her, which shocked her; revealing that he does not care about her and viewed her as a pawn.

Gorast, as the other makuta, had mastery over the element of shadow and 42 kraata powers, aside from the power of her mask: the kanohi Felnas, which inverted the power of whoever it's owner wanted temporaly. When she modified her own body into a completely mechanic one, she didn't need to sleep, eat nor rest, but at her stay in the Swamp of Secrets, her body was locked in an insectoid form and needed to feed and rest again due to the mutagen, as a side effect, his kanohi Felnas mutated too with a sting in the mouth that could absorb the inner light of other beings.

In the alternate Matoran Universe where Matoro failed to save Mata Nui and as the result the Great Spirit died, causing all the denizens to migrate to the island of Mata Nui. However, Gorast and the other Makuta were killed by Makuta Teridax who absorbed their antidermis, transforming himself into a colossal monster. 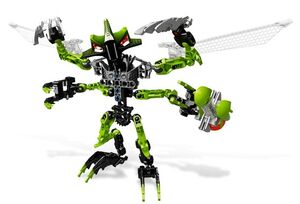 Gorast in her set form. 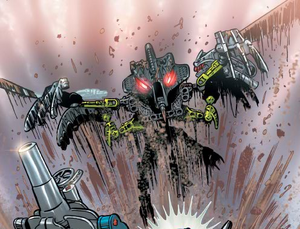 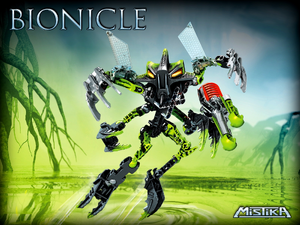 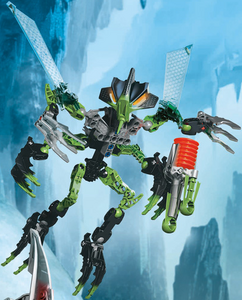 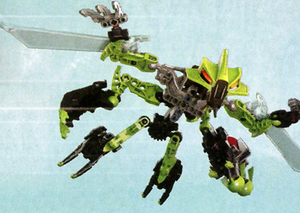