Gorath (in Japanese: ゴラス, Gorasu) is a minor anime-exclusive villain in Fist of the North Star. He the leader of a group of former racers known as the Thunder Army for KING.

He was voiced by the late Takeshi Watabe.

With Wolf and his Demolition forces failing, Joker orders Gorath to take the charge of taking out Kenshiro. He leads his gang through Jennifer's village, killing or wounding many civilians and takes Bat and Rin hostage.

Kenshiro then confronts Gorath's gang who have the kids tied up. Gorath then sends his motorcyclists armed with spikes to try and spear the Hokuto Shinken user. But Kenshiro kills them all.

Seeing this, Gorath presents a Type 97 ShinHoTo Chi-Ha tank, believing Hokuto Shinken will be ineffective against the tank before letting Bat and Rin go.

Gorath then orders a shell fired on Kenshiro who dodges in time. After getting his friends to safety, Ken faces the tank head on, his first attack focuses the visor of the vehicle, punching through the glass and taking out the driver from inside the tank, leading to Gorath taking control of the tank himself. Kenshiro confidently pummels the tank to the point where it will likely burn up. As Gorath tries to escape, so Kenshiro hits his Teikaku power point, turning his body against him by paralyzing Gorth thus causing him to fall back into the tank. Kenshiro then quips his tank will be his coffin, then he jumps off while Gorath is blown up along with his "precious tank".

Gorath's Thudner Army consists of motorcyclists armed with spiked bikes. As a last resort, Gorath will also use a Type 97 ShinHoTo Chi-Ha tank. 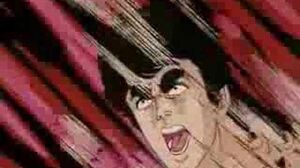