The Teleporter
No Eyes (by Mack)
No-Eyed Boot Licker

Protect his Inhuman kind through any means necessary (somewhat succeeded).

Gordon was a supporting antagonist in the TV series Marvel's Agents of S.H.I.E.L.D., serving as a major antagonist in Season 2 and a minor character in Season 7. He was an eyeless Inhuman with teleportation and force-field generation powers, as well as the right-hand of the Afterlife leader, Jiaying.

In Season 2, he was portrayed by Jamie Harris, who also played Hook-Handed Man in the A Series of Unfortunate Events film; while in Season 7, he is portrayed by Fin Argus.

Gordon was apparently a normal young man who was proud of his looks, and was being mentally challenged during his time in Afterlife before he would undergo Terrigenesis to become Inhuman. Upon going through the ritual, Gordon emerged scared as he was now living without eyes and the ability to teleport. Jiaying helped him try and navigate through multiple attempts. Following this, Gordon was eventually able to control his powers, navigate with his eyes and also learnt to generate force-fields.

Years later, an Inhuman named Eva Belyakov stole Terrigen crystals for her daughter Katya, who Jiaying declared unfit for Terrigenesis. Pursuing her to Bahrain, Jiaying and Gordon arrived too late as they watched the aftermath of the two Inhumans' deaths and seeing the effect it had on a particular agent (Melinda May) due to being forced to killing Katya.

Gordon eventually, at some point, received the job of being the Inhumans' link between the outside world and the Afterlife settlement. Potential Inhumans did not know the location of the settlement, only that Gordon was the access through his powers. If they chose not to stay, the secret of where Afterlife is located was safe; if they chose to live there, he would retrieve supplies from the outside for them.

On Wednesdays, Gordon would leave the settlement and bring everybody pizza from Chicago. Gordon also spent some time watching Lincoln Campbell, who would fight his girlfriend regarding his alcoholism. One evening, the two crashed into a telephone pole and Gordon saved them. He then offered Lincoln to stay at the Afterlife; his girlfriend was returned to the outside world. He was also present when Jiaying banished a potential Inhuman, J.T. James, who was caught sneaking through the settlement's archives.

One night, Gordon was at his home in the Afterlife where he noticed that his Diviner was glowing in reaction to Skye and Raina's transformation into Inhumans at the hidden Kree City. He then called an associate on the phone that there was new Inhumans and to tell "the others" that he would investigate. Gordon found the location of Raina just as she was attempting to commit suicide due to her hatred of her new Inhuman form. Gordon teleported to her location moments before S.H.I.E.L.D. agents could shoot her and teleported them both away.

When Jiaying's estranged husband, Calvin Zabo, formed a small team of enhanced people to fight S.H.I.E.L.D. as revenge for Phil Coulson killing Daniel Whitehall and "stealing" his daughter Skye, it was decided that Zabo would endanger the secrecy of the Inhumans' existence. During a confrontation between Zabo and S.H.I.E.L.D., Gordon stepped in and retrieved Zabo before teleporting back. Back at Afterlife, Gordon confronted Zabo about his actions and how he was "making too much noise", especially since he is actually a science experiment, not an Inhuman. He then told Zabo to meet with Jiaying to discuss his fate.

Bringing Skye to the Afterlife

After Skye arrived at a S.H.I.E.L.D. safehouse called the Retreat, Gordon took this opportunity to meet her. He arrived at her doorstep and greeted himself. Gordon told her that he was similar to her and, despite knowing what he was and what would happen, he still struggled with his change if it had not been for her mother. Gordon decided to ask Skye about her experiences with her powers and she described them as intense and scary, although Gordon argued that they were magnificent. After listening to Skye's fear of her abilities, Gordon told her how, with people like them, she could learn to control her abilities, but the decision had to be hers and that he would be waiting for her call before teleporting away.

Two days later, Gordon greeted Skye in the Afterlife once she woke up. He then introduced her to her transitioner, Lincoln, and then left him to take care of her. The next day, Gordon was asked by Skye to send a message to her S.H.I.E.L.D. colleagues, but he refused since he needed permission. He also refused to tell her what happened to her father and Raina. He then approached Calvin Zabo in his windowless cell, which was infuriating him. He then demanded to see her daughter, knowing she was there, but he refused to, and they fought. He won and explained that his lack of self-control endangered the foundations of the Afterlife and sealed the fate of himself and Skye. Gordon later brought Jiaying to Calvin, where the two embraced each other about their daughter.

Gordon tended to Raina's thorns as she sat before him; she showed pain when he touched her thorns and she expressed anger that he was not removing the thorns altogether. When she asked him why she was doomed to be the "monster under the bed", Gordon continued to assure her that she was not a monster but was in fact beautiful, and that her real gifts had not come out yet. Lincoln Campbell also tried to offer help, but Gordon rebuffed him, and told Raina that they would discuss things in further detail at another time.

Returning to Raina's room, Gordon was forced to inform her that it had been decided that due to her appearance, it was too dangerous for Raina to leave Afterlife, promising to instead take her to the most beautiful sights on Earth. When Raina continued to mourn her lost looks, Gordon tried to explain to her the struggle he had had when he lost his eyes after his own Terrigenesis and promised her gift would be beautiful. Gordon later took a young Inhuman named Ethan Johnston to a camping trip and told him that he would retrieve him when Johnston was ready to return to Afterlife again.

Upon learning of Raina's newfound precognitive powers from Lincoln, Gordon and Jiaying discussed how she may be the first known Inhuman in the Afterlife with such powers, and how she may be a valuable asset to the community. He then left Jiaying to discuss family matters with Skye as she arrived. Gordon then took her and Calvin Zabo to Milwaukee. Little did the two know was that Gordon also dropped off Lincoln nearby to keep an eye on them in case Zabo lost his temper again. Gordon later went to pick up Ethan, but found that he was unable to find him. He then alerted Jiaying about this.

Little did he know, HYDRA leader Dr. List was tracking him through his teleportation signature. Gordon then arrived at Zabo's building to retrieve Skye, but also accidentally picked up an enraged Zabo. He then went back for Lincoln, but was ambushed by HYDRA and barely escaped. He then informed Jiaying, Skye and the other Inhumans present, much to their dismay. Gordon refused to mount a rescue operation as it was too dangerous. Raina then arrived and informed Skye of her powers, which sghe proved to her regarding a vision of Coulson working with Grant Ward. She then told them about Skye saving Lincoln, where the two of them then convinced Gordon to take her to the Playground so she can assist S.H.I.E.L.D. rescue Lincoln. The mission was proved successful.

Raina then informed Gordon and Jiaying about a Kree Monolith being in S.H.I.E.L.D. custody that would be dangerous to the Inhumans, where it was secretly a portal to a distant planet that imprisoned the ancient parasitic Inhuman, Hive. Gordon then brought Raina to the Iliad, where they confirmed its existence before being forced to retreat after being noticed by S.H.I.E.L.D. Gordon and Raina return to alert Jiaying of the Monolith's existence, where he then argues with Zabo regarding that he still was not Inhuman. The argument was then ended by Jiaying.

Gordon was then alerted by Raina about S.H.I.E.L.D. apparently attacking the Afterlife thanks to Jiaying. When Raina considered that she should be the one to negotiate with S.H.I.E.L.D., he initially considered her intention, but still remained loyal to Jiaying. After retrieving Skye and Lincoln, he watched on about their reunion while still pretending to be on Raina's side. He then confronted Jiaying about Raina's plans, in which he oversee her confront the latter about and had her locked up in her room. He then greeted the S.H.I.E.L.D. agents upon their arrival and delivered Robert Gonzales to Jiaying for a peace negotiation.

The meeting fell to chaos when shots were fired and Jiaying exited the building wounded, claiming that Gonzales tried to assassinate her and declared war. Gordon went to her aid before taking his assistant to kidnap a S.H.I.E.L.D. agent and hijack a Quinjet. He left the assistant to fire on settlement, framing the agency altogether, but also destroyed her office to hide what happened to Gonzales, where in truth, Jiaying killed him with modified Terrigen Mist

After Jiaying was stitched up, Gordon returned to her with the kidnapped agent, revealing that he was aware of her plans to stage the attack and convince the Inhumans that S.H.I.E.L.D. declared war. He then watched her drain the agent's life-force in order to heal herself of her wounds and regain her strength.

Gordon teleported Inhumans onto the Iliad where they quickly took over the ship, as Coulson was occupied with Zabo's attack on one of his bases. Before long, the Inhumans had control of the ship and started rounding up the remaining crew members. Jiaying arrived on board and readied to move with her plan ensure that only Inhumans lived on the planet. Gordon later found Lincoln staring at the Monolith and explained that while it was beautiful, it is dangerous to the Inhumans. As Lincoln started questioning his loyalty and Jiaying's motives, Gordon assured him that is was necessary, while reminding him of his life before being Inhuman and why Jiaying went to great lengths to help him, convincing him to stay on their side of the war.

As S.H.I.E.L.D. arrived, Jiaying ordered Gordon to release the modified Terrigen mist into the ventilation system and affect everyone onboard. However, he arrived to find Alphonso "Mack" Mackenzie waiting for him. They then fought, with Gordon constantly getting the better of him thanks to his powers. He then locked up Zabo, who tried to talk Jiaying down. Gordon then returned and fought Mack, Coulson and Leo Fitz, where the latter trapped him in the room with quantum field disruption devices. They were able to get an upperhand over him, but just as he was about to sneak attack Fitz, he teleported where iron pole that Fitz was holding been embedded in chest, therefore killing him. As he dropped to the floor, he dropped a Terrigen crystal, which Coulson was able to catch at the cost of his left hand, stopping Jiaying's plans for good.

Gordon is an Inhuman who achieved his genetic superhuman powers and abilities after undgergoing Terrigenesis in the Afterlife Inhuman Settlement. 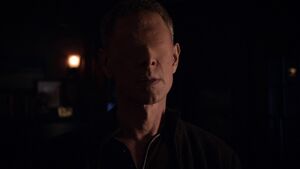 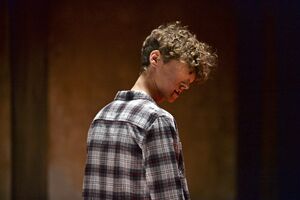 A younger Gordon after going through Terrigenesis. 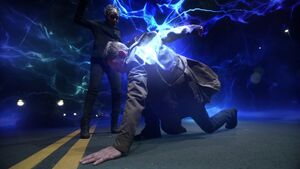 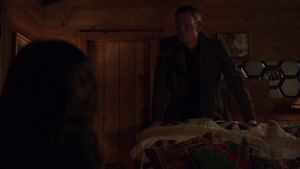 Gordon meeting Skye and asks for her to come with him to the Afterlife. 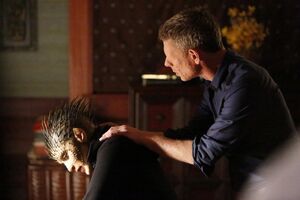 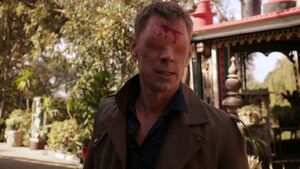 Gordon after barely escaping from HYDRA. 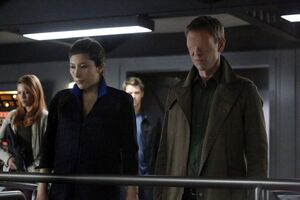 Gordon with Jiaying after they take control of the Iliad. 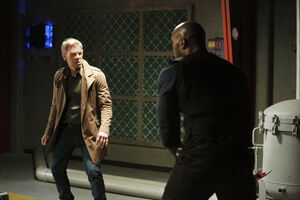 Gordon facing off against Mack. 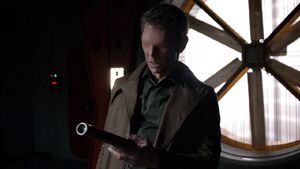 Gordon's death.
Add a photo to this gallery

Retrieved from "https://villains.fandom.com/wiki/Gordon_(Marvel_Cinematic_Universe)?oldid=4108199"
Community content is available under CC-BY-SA unless otherwise noted.