Making a lot of money.

Ruining companies to the ground for profit.
Collecting fine works of art.

To get rich by any means necessary even if it means stealing from family (formerly; succeeded).

To redeem himself in the eyes of his daughter and be a good grandfather to her child (currently; succeeded).

Gordon Gekko is the main antagonist of the 1987 film Wall Street and the main deuteragonist/antihero of its 2010 sequel Wall Street: Money Never Sleeps.

He is shown as one of the United States' most talented businessmen, and is most famous for his speech, "Greed is Good".

He was portrayed by Michael Douglas, who also played William Foster in Falling Down, Steven Taylor in A Perfect Murder and Yellowjacket in What If...?.

Gordon Gekko was born in Long Island into a middle-class family. He began working in real estate as an adult, and began building his fortune by selling an apartment complex for $800,000. He branched out into stock and bond trading, and eventually specialized in corporate takeovers of underperforming businesses, which he would restructure and sell for large profits. He worked his way up to become one of the most powerful, influential businessmen in the country.

Top of the Game

By 1985, Gekko has become a legend in the business world, a major Wall Street player respected and feared for his savvy and ruthlessness. He is also suspected by law enforcement of violating multiple financial regulations, but no one can prove it.

Bud Fox, an ambitious junior stockbroker at Jackson Steinem & Co. who idolizes Gekko, visits him on his birthday and, granted a brief interview, pitches him stocks, but Gekko is unimpressed. Realizing that Gekko may not do business with him, Fox provides him some inside information about Bluestar Airlines, his father Carl's company, which Bud learned in a casual conversation from his father. Gekko tells him he will think about it. Gekko places an order for Bluestar stock, becoming one of Fox's clients.

Gekko gives Fox capital to manage, but the shares he selects — by honest research — lose money. Gekko nevertheless takes Fox under his wing, but compels him to unearth new information by any means necessary, including unethical and illegal ones. One of his first assignments is to spy on British corporate raider Sir Lawrence Wildman and discern his next move. Through Fox's spying, Gekko makes big money, and Wildman is forced to buy Gekko's shares off him to complete his control of a steel company.

Fox becomes wealthy, enjoying Gekko's promised perks, including a penthouse on Manhattan's Upper East Side and a trophy girlfriend, interior decorator Darien. Still employed by Jackson Steinem, Fox is promoted as a result of the large commission fees he is bringing in from Gekko's trading, and is given a corner office with a view. He continues to maximize insider information and use friends as straw buyers to get rich.

Fox pitches a new idea to Gekko — to buy Bluestar Airlines and expand the company, with Fox as president, using savings achieved by union concessions. Fox persuades his father, who dislikes Gekko, to get union support for the plan and push for the deal. Things change when Fox learns that Gekko in fact plans to sell off Bluestar's assets, leaving Carl and the entire Bluestar staff unemployed. Although this would leave Fox very rich, he is angered by Gekko's deceit and wracked with the guilt of being an accessory to Bluestar's destruction. Fox chooses his father over his mentor and resolves to disrupt Gekko's plans. He breaks up with Darien, who refuses to plot against Gekko, her former lover and the architect of her career.

Fox manipulates Bluestar's stock value downwards. Gekko, realizing that his stock is plummeting, finally dumps his remaining interest in the company, only to learn on the evening news that the shares have been picked up at a lower price by Wildman, who will become the airline's new majority shareholder. Gekko realizes that Fox tricked him. Fox, meanwhile, is arrested for securities fraud and insider trading.

Sometime later, Fox confronts Gekko in Central Park. Gekko berates him for his role with Bluestar. He then assaults Fox, berating his ingratitude for several of their illegal business transactions - unaware that Fox is wearing a wire. Fox turns the wire tapes over to the authorities, who suggest that his sentence will be lightened in exchange for his help.

Despite Fox's efforts, Gekko manages to evade capture until 1993, when he is arrested and imprisoned for insider trading and securities fraud.

Gordon Gekko is released from prison in October 2001, after an almost eight-year prison sentence. Fox, meanwhile, is also released from prison and makes millions from restructuring and selling Bluestar, while still providing for its employees. Gekko and Fox run into each other at a charity function, and both claim that there are no hard feelings about what had occurred between them.

Seven years later, Gekko has become an author and a lecturer, and is now promoting his new book, Is Greed Good?. He also tries to reach out to his daughter, Winnie, but she wants nothing to do with him because she blames him for her brother Rudy's drug addiction and suicide.

Winnie's boyfriend Jacob Moore, a stockbroker who is newly unemployed after his firm's CEO, Louis Zabel, committed suicide, attends one of Gekko's lectures and tells him that his firm was ruined by corrupt bond trader - and Gekko's former business partner - Bretton James, who spread rumors throughout the financial world that the company owned toxic debt. James also testified against Gekko years earlier, helping send him to prison. Gekko and Moore agree to make a "trade", in which Moore helps Gekko mend his relationship with Winnie in return for helping Moore destroy James.

With Gekko's help, Moore spreads rumors about the nationalization of an African oil rig that Bretton’s company owns. The company loses $120,000,000, but James is impressed with Moore's ruthlessness and hires him.

Gekko asks for another trade: he wants to have a face to face meeting with his daughter. Moore convinces her to have Gekko over for dinner, and Gekko tells her that he tried to save Rudy by hiring therapists and arranging, from prison, to have drug dealers stop selling to him. Winnie forgives him, and informs him that she and Moore are expecting a child.

At work, James sidelines Moore so his point woman can take over a pitch to the Chinese. They are unimpressed with her pitch, stating that they are looking for the next big thing in energy. Moore presents them with the fusion research he had been working on at his former company, and they agree to invest in it. Soon afterward, however, the economy collapses and the Chinese pull their support from Moore's project; Moore learns that James directed funding to underperforming solar panels in order to ensure Moore's failure and enrich himself.

Gekko proposes using a $100 million trust fund account, which he hid in Switzerland for Winnie in the 1980s, to fund the fusion research, and Winnie signs over control of the funds. Gekko's old corrupt instincts win out, however, and he takes the money and flees to London, swindling his own daughter. He uses the money to start a successful firm, and once again becomes a player in the financial world. Moore tracks him down and proposes to make "one last trade": if Gekko gives Winnie the money back, they will let him have a relationship with their child. Moore shows him an ultrasound of the baby, but Gekko, despite being moved, cannot let go of being rich and important. Gekko says that giving the money away is a "trade he cannot make."

Over the next few weeks, by using the previous information collected by Gekko about James, Moore exposes James' crimes, ruining him. James' board of directors go to Gekko in order to start business with him, in view of the new credibility Gekko gained through his London firm's astounding success: by correctly predicting the coming financial collapse, Gekko traded the market in such a way that he has turned the $100 million into a sum in excess of $1 billion.

Gekko tells Moore and Winnie that he anonymously donated the $100 million to the fusion project to atone for what he did. He apologizes and asks for their forgiveness. One year later, Moore and Winnie celebrate their son's first birthday with a party, at which Gekko is also present.

Gekko symbolizes pure, unadulterated greed. He has more money than most people could even dream of, and yet he is driven by an insatiable need for more. In order to achieve that end, he is willing to cheat, lie, and steal, even from his own daughter; to him, people are only objects to be used in order to get ahead, and discarded once they have outlived their usefulness.

Going to prison and losing his son change him, however; he finally sees that his greed has cost him his family and ruined innocent people's lives. He tries to atone by helping Moore and reaching out to Winnie, but even then his greed gets the better of him, and he cheats his own family. In the end, however, he does the right thing by using his ill-gotten money to help people, and putting his family's needs over his own. 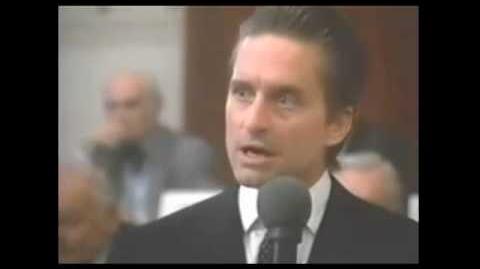