Gordon Skellingbones is the main antagonist of the YouTube channel LewToons. He is a skeleton who appears in the videos, claiming to be Chad's archenemy, though Chad denies this. On a few occasions, however, Skellingbones has helped Chad (but not without some harassment).

He first appeared in the "Top 10 Superhero Cartoons" video.

He is portrayed by Chad Lewis, who also plays himself as the host.

Not much is known about Skellingbones's past. He simply refers to himself as a YouTube kidnapper.

In "Top 10 Superhero Cartoons", he kidnaps Chad and holds him hostage for no apparent reason except living up to his title. He is quickly defeated by the Toonslinger.

Skellingbones later appeared in the "Knockoff Aladdin Review" video after the death of Chad's co-host Gretel. He offers to bring her back if Chad reviews Goodtimes Home Video's ripoff of Disney's Aladdin. Chad agrees, and reviews the film. Skelingbones holds up his end of the bargain, but reveals that he could have brought Gretel back the whole time.

He later appears in the "Santa vs. The Snowman 3D Review", "The Snow Queen Vs. Frozen", and "Knockoff Little Mermaid Review" videos, where he bugs Chad and forces him to review bad animated films.

Later, in the video "Tarzan & Jane Review", Skellingbones refers to himself as "an all-powerful shinigami."

Skellingbones is a skeleton with a dark yellow skull. he wears a black mask, black long-sleeved shirt, and black rubber gloves. 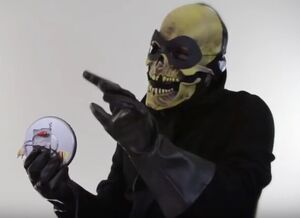 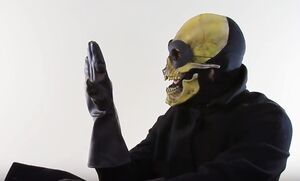 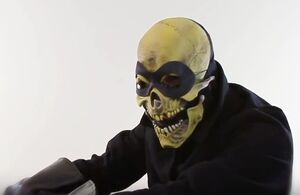 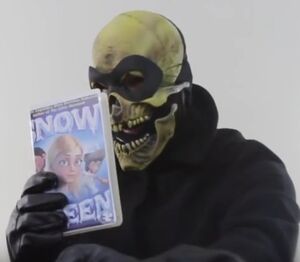 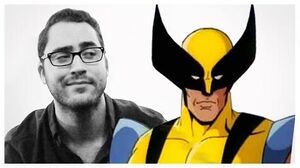 Top 10 Superhero Cartoons
Add a photo to this gallery
Retrieved from "https://villains.fandom.com/wiki/Gordon_Skellingbones?oldid=4171228"
Community content is available under CC-BY-SA unless otherwise noted.