Corrupting all it sees.

Draining life forces.
Absorbing everything it can for power.

Destroy all civilizations in the universe (failed).

The Gorea is the main antagonist of Metroid Prime: Hunters. He is a monstrous entity who fought the Alimbic people, both destroying them and being imprisoned for it.

The Gorea resembles a humanoid entity. His skin is a metallic shell, which gives him protection from his enemies. Many of his features give a bright orange/yellow glow.

The Gorea is a terrifying, eldritch cosmic entity. His origin point is unknown, but he may just be a cosmic traveler. His main source of entertainment is destroying civilizations.

Featured in the game Metroid Prime: Hunters, Gorea, as disclosed in the story, came to the planet Alinos in the form of a noxious gas which corrupted all. However, the creature turned into the form of an Alimbic, mocking the native people of the planet. Gorea drained the Alimbic life energy, causing stress for the psychically sensitive Alimbics. Gorea also copied their own weaponry and used it against them. A great tragedy befell the Alimbics with Gorea's infernal arrival, and soon the Alimbics were no more.

However, all was not lost. Eight Alimbic elders came together in the Council of Elders and debated how to end Gorea and the extinction of the Alimbics, if only for a brief time. They managed to concoct a last-minute plan and banish Gorea from Alinos into a strange dimension named the Infinity Void, composed of antimatter. They locked Gorea in a vessel named the Oubliette and they hoped it would never be awakened. If Gorea was, he escape. Then, he would consume all life in the cosmos in his insatiable hunger.

The spirits of the Elders who concocted the plan were voluntarily transferred into eight Octolith keys. These, scattered across the ruined surface of Alinos, became essential for keeping Gorea imprisoned.

Samus and six other Hunters came to planet Alinos on a mission from the Federation. They then formed a rogue group because of their natural rivalry to obtain the priceless Octoliths. Samus had to fight each Hunter to steal an Octolith from them. Eventually, she had all eight Octoliths and, along the way, learned much about the tragedy that befell Alinos. She then used the Octoliths and opened the Infinity Void and released the Oubliette.

Upon arrival in the Void, Samus learned that the other Hunters had also penetrated the Oubliette but had their ammunition stolen by Gorea, who had sensed their arrival. Once his seal broke, Gorea impaled the six hunters with his tendrils and drank their life force. Discarding the unconscious Hunters aside, Gorea revealed his monstrous true form as a three-legged Alimbic and attacked Samus.

Samus had to switch from weapon to weapon to find a weakness in Gorea's form. The battle was very rough and fast. She had to struggle to even injure Gorea. Eventually, she wounded the beast to the point where his humanoid form simply fell apart.

Even after he was broken apart, however, the Gorea had two forms. Samus had to travel further into the Oubliette to find a weapon suitable to damage the entity. He revealed his next form as a blob of gas, rotating and attacking. Samus, armed with the Omega Cannon, finally reveals a weapon capable of ending the Gorea.

As he took one last hit to his heart from the Omega Cannon that Samus used on him to combat his might, the Gorea explodes. As he met his demise, Samus broke free from the Antimatter Dimension that the Gorea challenged the series's heroine inside. 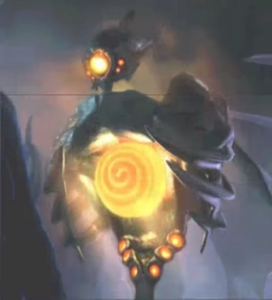 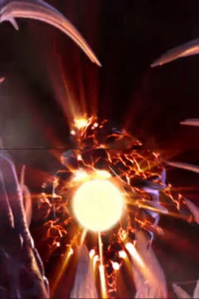 Gorea explodes from the Omega Cannon. 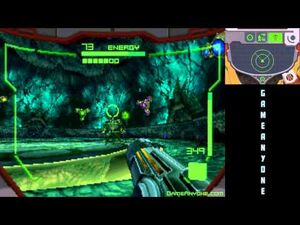