World of Warcraft: Warlords of Draenor

Can bond with certain elements

Eat all minerals they can and look after their respective colonies.

Amoral Monsters
Goren are vicious humanoid creatures featured in the Warlords of Draenor expansion pack of World of Warcraft.

The goren are often a nuisance to miners because the Goren feast upon minerals such as gems, ore, and even elementals. They are capable of obtaining the strength of the minerals they feast upon allowing them to shoot them out of their bodies and even gain the power of an elemental they devour.

The minerals they absorb metabolize upon their backs and arms into flawless matrixes almost as if produced by a forge on Argus. This makes the scales valuable to the Draenei.

The goren produce a foul smelling gas that can be used for fuel and may be used to digest they minerals they consume.

Though rare since goren prefer minerals, goren can and will eat flesh from living beings. 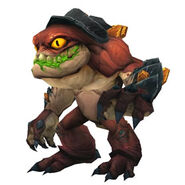 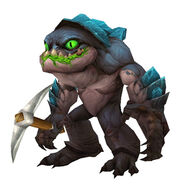