Summon the Creation King and rule the world.

Gorgom is a cult and criminal group serving as the main antagonists of the 1987-1988 Kamen Rider series installment Kamen Rider BLACK. They are notorious for its terrorist activities in the name of world domination and racial superiority over humanity.

Based in Japan, members of Gorgom consist of both human and non-humans. Their only formidable foe seems to be Kamen Rider Black, a failed creation of theirs.

For many years, Gorgom has been ruled by the mysterious Creation King. As Gorgom tradition dictates, a new King must be chosen every fifty millennia. The selection process involves finding several worthy candidates who will be transformed into mutants deemed Century Kings, sentenced to fight for the crown with the survivor becoming the new Creation King.

In 1987, Gorgom chose Kotaro Minami and Nobuhiko Akizuki as Century Kings. During their surgery, then current Creation King commanded the High Priests to place the powerful Holy King Stones into their bodies. Kotaro was implanted with the "Stone of the Sun", and was given the name Black Sun. However, Soichiro Akizuki, the father of the brothers, went against Gorgom and freed Kotaro from brain surgery. Nobuhiko received the "Stone of the Moon", and due to disrupted surgery, was in extended recovery before emerging as "Shadow Moon."

Kotaro barely escaped with his life, but Nobuhiko remained captured by Gorgom, where he hibernated to become the next Creation King. Soichiro's actions were unforgivable, as Golgom sent five Spider Mutants to kill him.

After the successful assassination, Gorgom continues to terrorize the country, in order to defeat Kotaro and take his Kingstone, and to rule the world.

Gorgom also exists in the A.R. World of Black, where it is fought by a alternate Kamen Rider Black who never became RX. Dai-Shocker's Apollo Geist arrived in this world prior to the World of Black RX, recruiting the Gorgom cult as a result. Gorgom's Sai Mutant was summoned by Apollo Geist to convince Schwarian of the Crisis Empire to join Dai-Shocker. He is summoned again to help protect Apollo Geist from Black RX, only to be quickly destroyed by Black's Rider Punch.

Gorgom allows any humans to join them. They were lured into the syndicate as they found Gorgom's offers interesting. These humans were willing to become Gorgom's monsters which could live for up till 5,000 years.

Gorgom's Mutants are genetically altered half-beast humans possessing long life that lasts 5,500 years. For Gorgom's human members, being transformed into a Mutant is the ultimate reward for their loyalty. Each Mutant is based on an animal or plant lifeform. Among those Mutants were the: 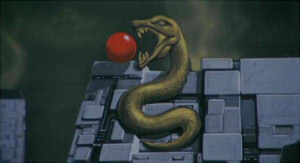 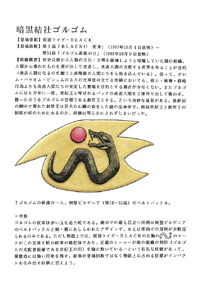 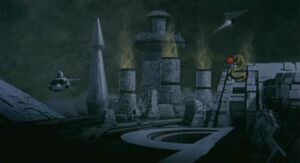 Retrieved from "https://villains.fandom.com/wiki/Gorgom?oldid=3465351"
Community content is available under CC-BY-SA unless otherwise noted.