One of the World's Greatest Eaters (by Vincent Price)

Knowledge of who looks appetizing and who doesn't 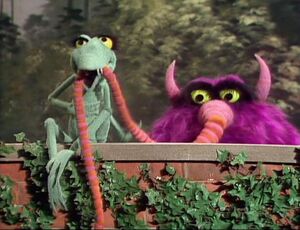 Gorgon Heap was a purple live-hand Muppet Monster who was featured in the first three seasons of "The Muppet Show", most frequently while he was eating other Muppets.

Although he appeared as early as "The Muppet Show: Sex and Violence" pilot, he was not named until the culinary-themed Panel Discussion in the Vincent Price episode, in which Vincent Price introduced him as "one of the world's greatest eaters." He proceeded to eat Pierre LaCousse, one of the world's greatest chefs, before doing the same to Kermit. The 2 elderly heckler balcony gentlemen, Statler and Waldorf, said that him eating Kermit should be reported to a host consumption agency.

He also played the role of Fielding the Butler in "Sherlock Holmes and the Case of the Disappearing Clues", the UK Spot in the Joel Grey episode.

Gorgon Heap has been performed by various Muppeteers, including:

Although Gorgon appeared primarily during the first two seasons of The Muppet Show, he made one appearance in the third season as a drummer in the Leslie Uggams episode.

His looks often changed between episodes. Sometimes the horns on his head were left off or replaced with ears instead, and in the Rich Little episode, he was given an elongated, worm-like nose for the "Inchworm" sketch.

This character was a modified version of Big V, a similar character from Muppet variety show acts in the 1960s.