Gorgoneion is the main villain and final boss from Crimzon Clover.

Gorgoneion is a massive sphere-like super-computer. It is constantly absorbing data and materials, being able to produce new weapons on the fly, even while being attacked. It's mechanized forces are constantly advancing, having reached as far as the Armoured City. While it's true objectives are unknown, Gorgoneion is creating a powerful doomsday weapon known as Crimson Heart, apparently intending on destroying humanity. Three ships are dispatched from a submarine carrier to fight Gorgoneion's forces, fighting through the Armoured City and advancing through the canyon and caves which lead into the secret Base where Gorgoneion is hidden.

Before fighting Gorgoneion the player has to take down a series of flying guns. Upon reaching the boss he will remain stationery while alternating between shooting waves of purple bullets and shooting a straight laser while scattering blue bullets. Once his first health bar is taken down the tubes holding him in place will break, allowing him to float around the screen, using courtains of purple and pink bullets during this phase. On his next phase he will start firing yellow lasers and purple bullets aimed at the player. In the final phase Gorgoneion will start to bounce around the screen, attempting to crush the player.

If the player used any continues the game abruptly ends after Gorgoneion is destroyed. Otherwise Gorgoneion will deploy the completed Crimson Heart before exploding, which then serves as the game's true final boss. 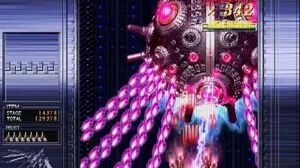 Crimzon Clover - Gorgoneion
Add a photo to this gallery
Retrieved from "https://villains.fandom.com/wiki/Gorgoneion?oldid=2569720"
Community content is available under CC-BY-SA unless otherwise noted.