Gorm is one of the Seven Sages of Team Plasma in Pokémon Black and White. He never fights the player directly.

Gorm is the second of the Seven Sages encountered by the player. He appears in Pinwheel Forest after the player defeats the final Team Plasma Grunt there. He decides to abandon the Dragon Skull since it isn't worth anything to Team Plasma and reveals a little more about Team Plasma itself.

He is later seen at N's Castle where he battles the Unova Gym Leaders alongside all the other sages except Ghetsis.

His final appearance is after N and Ghetsis have been defeated. He appears in the Dreamyard, where he gives the player TM75 Swords Dance and is taken in by Looker.

He only makes one appearance in the sequels, showing up in Pinwheel Forest again while the player and Cheren are investigating there. He tries to sneak up on them much like he did to the player character in Black and White in the Dreamyard. He speaks to the two briefly and leaves. Cheren follows him.

In The Mystery of the Missing Fossil, Black was investigating the disappearance of a Dragon Fossil from Nacrene Museum. He found the skeleton in Pinwheel Forest, where the thieves were lurking, three grunts who met him at Dreamyard and Gorm. The sage was impressed by Black's skill on finding their location and, seeing his potential, commanded the skeleton to attack the boy. Given its fast and accurate move, Black was able to identify the controlling Pokémon and defeated it with the help of Burgh's Whirlipede. Before escaping with the grunts, Gorm revealed that Team Plasma is seeking for a Dragon-type Pokémon to fight by their side. 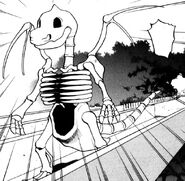