Hanging out with the protagonist.

Goro Akechi is the deuteragonist/secondary antagonist of the 2016 videogame Persona 5 and its expansion update Persona 5 Royal. He was a detective who is investigating the mysterious Phantom Thieves of Hearts case sensationalizing Japan. Akechi eventually joined the Phantom Thieves, despite his negative stance towards them and their activities.

However, it was later revealed that Akechi was a member of Masayoshi Shido's conspiracy, who joined into the Phantom Thieves to orchestrate their downfall, but instead using this opportunity to get revenge on Shido instead when they outwitted his usefulness to eliminate his biological father. His true nature as a villain was not revealed until the climax of the game, although there are certain foreshadowing in his true nature after his debut in the story.

He was voiced by Sōichirō Hoshi in the original Japanese version, and Robbie Daymond in the English dubbed version, with the former also voiced Death Gun, Lio Shirazumi, and he also voiced Alan Sylvasta from the new TV series called BNA: Brand New Animal.

Akechi is an ace detective who boasts a sharp wit and high level of intelligence. His aptitude for solving cases has him named "The Second Advent of the Detective Prince".

Despite his popularity, Akechi is actually quite lonely and yearns for attention and validation. He was abandoned by his father, Masayoshi Shido, lost his mother to suicide (which he later claims was the result of him being a "cursed child") and never had any genuine friends.

Several years before the start of the game, Goro offered his powers as a Persona user to Shido, who asked Goro to eliminate several major political figures who stood in Shido's path to securing the chair of Prime Minister. However, this was an underhanded revenge plot to get close to Shido and murder him after he won the election.

During this time, he mastered the use of his true Persona, Loki, and took down important figures connected to Shido by inflicting psychotic breakdowns; it is implied that he even killed Wakaba Ishiki, Futaba's mother, who was researching the Cognitive world for Shido. However, Akechi appears troubled while sitting in Leblanc the day after he shoots Okumura's shadow, signifying that he feels guilty about the crimes he has committed.

After Akechi joins the Thieves in an attempt to capture and eliminate their leader, he experiences how it feels to be bond with a group of friends for the first time, particularly with Ren. This leads to Akechi experiencing ambivalent emotions about disposing of the Thieves per Shido's orders. Throughout the game, Akechi remarks that there's "something special" about Ren, and he notes that they have a few things in common. Akechi simultaneously admires and envies Ren, who he later comments could have been "a great rival" or "a friend" if fate had dealt them a different hand.

After the Thieves defeat Akechi, Shido's evil cognitive version of Akechi appears and reveals that Shido knew Akechi's true identity from the start and has planned to kill him after the election. The Cognitive Akechi demands that the real Akechi shoot the protagonist to spare his own life. Akechi redeems himself by sacrificing his life to save his friend - he shoots his Cognitive double, then seals himself and the double behind a steel barricade. Smiling sadly, Akechi asks Ren to take down Shido in his stead. With this, Akechi and the protagonist's "desires become one". Two gunshots then ring out, at which point Futaba is no longer able to sense his presence. Later, after Yaldabaoth's defeat, Sae tells Joker that Akechi is missing.

Akechi returns in Persona 5 Royal, an updated version of Persona 5 with new plots and features, and serves as the triangonist in the Third Term Arc. In the trailer, Akechi is somehow shown fighting with other Thieves in the new Palace as a playable character once more, dressed in his Black Mask attire and wielded Loki as his Persona, a feature which the producers of Persona 5 once considered for Akechi but is cut due to time constraints.

In Persona 5 Royal, Akechi's Confidant is optional rather than a function of story progression. As it is done, more and more of his Detective Prince facade falls away to reveal his true, cynical personality and he comes to admit a lot of his mannerisms are due to him being desperate for friends. His desire for the world to be just is shown to be genuine, but far more brutal than he normally lets show. Over time, he comes to genuinely view the protagonist as a friend, becoming deeply regretful over the role he feels necessary to destroy his father.

Should the third term be triggered, Takuto Maruki's wish-granting powers change the normal course of events so that he barely survives the battle with his Cognition and turns himself in to draw police attention away from Joker. However, due to the wish-fulfillment aspects, Akechi is mysteriously released for no good reason, which confuses and upsets him as he does not believe he should escape the consequences of his actions. This leads to him, Kasumi Yoshizawa, and the protagonist being the first to wake up from Maruki's illusion, and he rejoins the team to stop Maruki.

While he knows this will lead to the original timeline and his probable death being restored, he admits that even in a world where he has everything he wants, after being manipulated by Shido for so long he would rather die than live under Maruki's control, and he views Maruki as a coward. After Maruki's defeat, Akechi had vanished alongside the entire dream world with his original presumed death to be reverted back. However, in the game's final scene, a figure resembling Akechi can be seen as the protagonist takes his train home, ultimately leaving his final fate ambiguous.

In Super Smash Bros. Ulitmate, Akechi appears as both a cameo palletswap for Joker and a support spirit that gravitates items towards the player. His spirit battle is against Marth and a giant Pit (representing Robin Hood) that converts opposite controls on the fighter's movement. Only Marth has to be defeated to win. 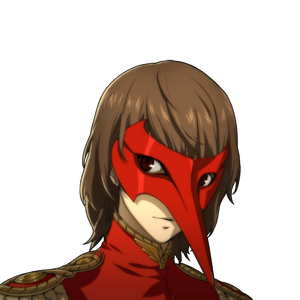 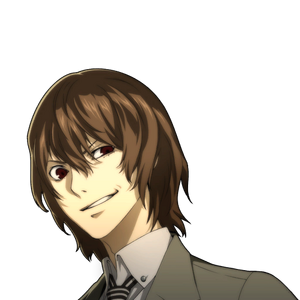 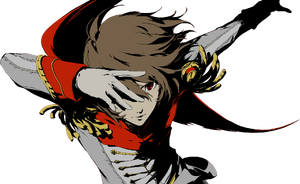 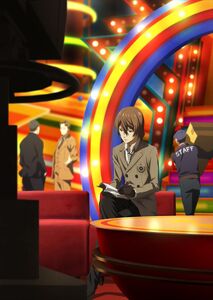 Goro Akechi in Persona 5: The Animation. 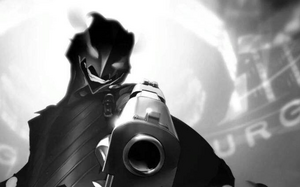 Goro Akechi as the Black Mask. 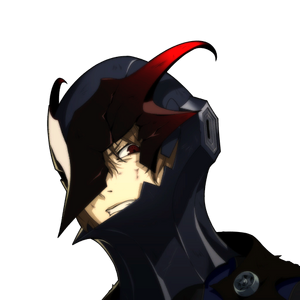 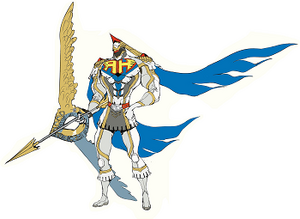 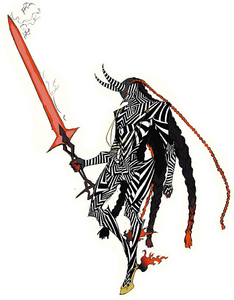 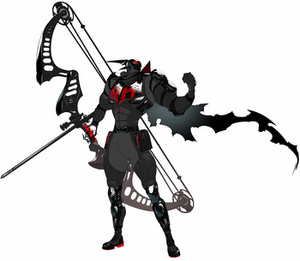 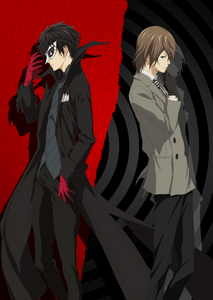 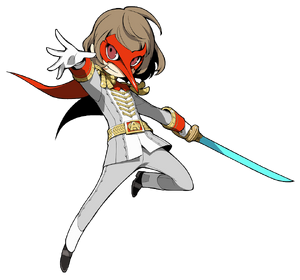 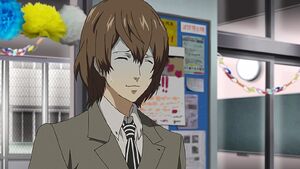 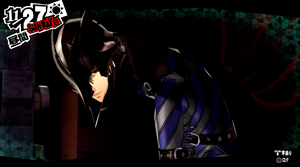