Dark Nest I: The Joiner King

Remaining hidden and secretive from everyone else.

Provoke a war between the Killiks and the Chiss and prove a motive for the Killiks to expand through the rest of the galaxy.

Bring all of the sentient beings under the influence of the hive mind.

The Dark Nest, or Gorog, was a secret nest of Killiks that was hidden from the rest of The Colony. It was also the most violent—it sought to use the rest of the nests against the Chiss after the Killiks absorbed the three Force-sensitives who escaped from Myrkr in 27 ABY during the Yuuzhan Vong War: Lomi Plo, Welk, and Raynar Thul. The first two were absorbed by the Dark Nest, Lomi became the Unseen Queen of the Gorog while Welk became the nest's Night Herald, thus giving Gorog its qualities of secrecy and manipulation; while Raynar was absorbed by Yoggoy, eventually became UnuThul and forming Unu so that the rest of the Colony took on his attributes of respect for life.

Later, Alema Rar was absorbed by Gorog and replaced Welk as the nest's Night Herald, after the Dark Jedi was killed by Jedi Grand Master Luke Skywalker. She was presumably deceased after a duel with Jedi Knight Leia Organa Solo.

Like Unu, Gorog, or the Dark Nest (as it was referred to by the New Jedi Order), was created after the Crash during the Yuuzhan Vong War. However, whereas Unu was created from the beliefs of former Jedi Raynar Thul, Gorog was created under the influence of the Nightsister Lomi Plo and her apprentice Welk. Imposing figures, individual Gorog were excellent fighters who would literally explode if their carapace was breached, making them living bombs that could be used to attack other nests. Because of the influence of the Nightsisters, the Gorog were able to keep their existence a secret from the rest of the Kind, tapping into the Force to mask their presence. In fact, not even UnuThul knew about the existence of the Gorog hive on Kr and vehemently denied its existence when questioned by Jedi Knight Leia Organa Solo and her husband Han Solo, who had seen it firsthand.

When the Chiss began to stop the encroachment of the Colony on their section of the Unknown Regions, many were captured in battle and a large number chose to become Joiners of the Gorog hive. It later turned out that the Chiss served as a source of food for young hive members. Jedi Grand Master Luke Skywalker and his New Jedi Order believed that the Will of the Gorog nest was broken when Skywalker killed Welk in combat on Kr, but it became clear that this wasn't true.

Putting different bits of information together, Skywalker was able to figure out that the Gorog hive was trying to break his will and invade his mind in an effort to make him a Joiner and gain control of the New Jedi Order. Jedi Knight Jacen Solo had a similar revelation, although it came to him in the form of a Force-induced vision that showed the galaxy in flames—indicating to him the Gorog's desire to take control of the entire galaxy. In a series of struggles, Luke managed to destroy Lomi Plo, then set out to confront UnuThul and force him to cut off his contact with the Killiks. Skywalker's plan ultimately succeeded, and the Gorog hive was eliminated as the unconscious mind of the Colony.

However, the Dark Jedi Alema Rar, the onetime Night Herald of the Dark Nest, had survived her duel with Organa Solo on Tenupe and considered herself the final member of the Gorog hive. During the Second Galactic Civil War, Gorog's destruction was one of Rar's motives for wanting vengeance. 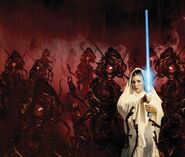 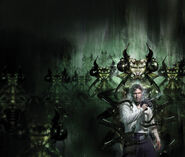