Leader of the Black Berserkers

To kill all gods. (failed)

Gorr The God Butcher is the main antagonist of the 2013 comic series Thor: God of Thunder. He is an alien from an unnamed planet, harbouring an intense hatred for gods, due to false beliefs and hopes that the gods would reach and protect him and his family when needed.

Upon acquiring the symbiotic Klyntar known as All-Black, Gorr formed his own army known as the Black Berserkers and sought out to slay all the gods as an act of revenge and means to avenge his family.

Gorr holds a very deep contempt and hatred towards any and all deities. In his view, all Gods are either cruel or useless and should be purged from existence.

He does not bear any particular ill will towards mortals (though he does see them as foolish for depending on gods), though it's made amply clear that his misguided quest to rid the world of gods would make it a much worse place for many mortals, too.

At the same time, he is still presented as being partially in the right, as many, many deities do exist who are exactly as worthless and uncaring as he says they are (even Young Thor used to be one of them), and Thor himself wonders if perhaps humanity may be better off without gods.

When dealing with gods, Gorr is fantastically cruel. He revels in making deities suffer and tries to make their agonies last as long as possible, regardless of what they are gods of. Throughout the series, Gorr is called out several times on the fact that, in his quest to kill all gods, he has himself become the very worst god of all - immensely powerful, power-abusing, completely devoid of all empathy. He also seems to have lost his mind over the millennia, to the point that by the end, he was willing to kill his own wife (technically a copy of her) just for calling him a God.

It is implied that Gorr's wickedness was not entirely his own. While he did have a hatred against gods, it was amplified and increased a thousandfold by the symbiote bonded to him, All-Black the Necrosword.

Gorr was once a simple man living on a dying alien planet, constantly wracked by famine, predators and natural disasters. His species was very pious, constantly praying to the gods for help, but that did not save Gorr's mother from being torn apart by carnivores, his wife (pregnant with his child) from being swallowed into the ground by an earthquake, and his son from starving to death as Gorr tried in vain to console him. As a result, Gorr began to doubt the existence of Gods, which led him to getting exiled from the tribe.

In his exile, Gorr observed a battle between two gods that left them mortally wounded and fallen to the ground. In that moment, Gorr's doubt turned into hate, as now he knew there were gods indeed, they just could not be bothered to care for the mortals who worshiped them and looked to them for help. Sensing Gorr's rage, the Dark God's weapon, All-Black the Necrosword, attached itself to Gorr. Taking the opportunity, Gorr accepted the weapon, finished off the two dying deities and went on a quest to kill every god in the universe.

Gorr's quest took him all across the Cosmos, but the story picks up when he landed on Earth. Gorr is implied to have killed a God of North America before coming to Eastern Europe in 997 CE. Upon arrival, he kills the Slavic gods Chernabog and Perun before attacking a young Thor. Gorr is able to overpower Thor, but the thunder god conjures a lightning strike that knocks both of them out of commission. Thor escapes, but his pride leads him to start hunting down the God Butcher alone to finish what he started. Gorr traps him in a cave, where he is tortured for 7 days. Eventually, Thor's mortal followers find him and try to free him, and while Gorr easily kills them, they provide enough distraction for Thor to escape. After breaking free from his bonds, Thor cuts off one of Gorr's arms with an Asgardian axe, and believes that he killed him.

Gorr remained alive in fact, and realized that he could not keep butchering gods one by one. He started building a huge army of darkness constructs (Black Berserkers) and something that would allow him to end all gods in the universe - past, present and future - in one fell swoop. To this effect, he forced Shadrak, alien god of bombs, to grant him the knowledge to create a device that would end all gods throughout all time.

In possession of this knowledge, Gorr only needed to build his bomb. He first invades Omnipotence City, meeting place of all gods. There he finds a book mentioning the location of Chronux, a hidden world where time gods monitor the time stream. Reaching Chronux, Gorr kills all of the Gods present and pours their blood into the time well. Using it to time travel, Gorr finds himself in the first moments of creation, where he tears out the heart of an Elder God to power his doomsday device. Gorr returns to the present and is immediately attacked by Thor, but he dives into the portal once again, this time headed for the future. Thor follows him, but instead of arriving together with Gorr, he arrives a few hundred years late and finds an Asgard torn apart by Black Berserkers, where the only god left is a future version of himself, who has now become the the All-Father, and is being tormented eternally by Gorr. The two Thors find that Gorr's Black Berserkers have retreated in anticipation of his Bomb's completion, and immediately set sail for Gorr's base world to put an end to the Butcher.

Throughout the hundreds of years between his arrival and Thor's, Gorr had been harvesting god-blood to make himself more powerful, as well as kidnapping Gods and making them his slaves, making them toil the centuries away with no respite, building the instrument of their own doom. Gorr also, inexplicably, had his wife and son with him on his base planet. In the final days of the Godbomb's construction, Gorr also yanked Young Thor (of year 997) out of his timeline, enslaving him too as he wanted him to contribute the final touch to the bomb. Instead, Young Thor spearheads a rebellion and attempts to destroy the Godbomb with a chunk of unstable matter - this fails, but the blast flings Young Thor into space, where he meets with the newly arrived All-Father Thor and Avenger Thor.

Gorr attacks the three Thors, and the All-Father's Thorforce begins to overwhelm him. He commands his Black Berserkers to slaughter his slaves, and his power skyrockets from the spilled god-blood, allowing him to defeat all three Thors at once. He blasts All-Father Thor into space, buries Avenger Thor within the heart of his planet, and sets off to use Young Thor's blood for triggering the Godbomb.

As the end of all Gods draws near, Gorr's wife exults, saying that Gorr himself is her God. Gorr flies into a rage at those words and kills her, saying that he is "no one's god". His son finds out about this and realizes that his father has turned into a monster, far worse than the gods he had been fighting, and must be stopped. He helps Avenger Thor make his way out of the core of the world, even as All-Father Thor is also returning from space at full speed. But they are too late. Even though Young Thor bites Gorr's eye out when Gorr tries to sacrifice him, this gesture of defiance fails to make much of a difference. Discarding Young Thor, Gorr rips out the heart of another god and triggers the Godbomb.

All-Father Thor attacks Gorr personally to keep him occupied, while Avenger Thor tries to stop the detonation of the doomsday device, but initially fails. As every god through space and time starts dying, they all see a vision of Thor struggling to contain the Godbomb's explosion. Every god that was, is or ever will be then prays to Thor, and with newfound power Thor manages to contain the Godbomb's blast and absorb Gorr's own weapon for himself, leaving the Butcher powerless.

In his last moments, Gorr's "son" arrives to denounce his father before vanishing in a blob of darkness. All-Father Thor explains that both he and his wife were nothing but more constructs of Gorr's Necrosword, and that it's not the son who helped defeat the father - it's the remaining good within Gorr's own soul that helped cast aside the evil. Nevertheless, Gorr remains defiant to the end and meets his death under Young Thor's axe.

Gorr is by himself powerless, but he fights using the former symbiote of Knull, All-Black. With All-Black attached to him, the klyntar takes on the form of the Necrosword and grants Gorr dark power proportional to the number of deities he slaughters. In the past, Gorr was barely more powerful than Young Thor, but after killing countless more gods, he becomes so powerful that not even three Thors - including a nigh-omnipotent All-Father - can defeat him. He was able to slaughter entire Pantheons effortlessly and single-handedly.

The main ability of the Necrosword is to create constructs out of dark energy. Gorr could replace his own limbs and create weapons, tendrils and projectiles out of darkness in combat. At one point, the Necrosword was able to permeate an entire star with its power, turning said star black. Gorr could also use it for more complex purposes - like creating the non-sentient Black Berserkers, who were entirely servile to his will. Each of those had enough power to lock Avenger Thor into a stalemate, and he had hundreds of thousands of them under his control. He also made a giant black serpent that kept even All-Father Odin occupied for a long time. Beyond that, Gorr was able to create fully sentient imitations of his wife and son using his power.

All-Black also provides Gorr with a divine degree of super-strength, endurance and agility, enough to overpower multiple high-level deities at once. Even before reaching his full power, he took a blast that sent him flying light-years away, and stayed alive. At his most powerful, he fought within the heart of the sun, while being attacked by two Thors (one of them using the omnipotent Odin/Thorforce), and defeated both of them. Some of the gods Gorr has slain over the course of his life were the size of mountains, and one of them reportedly wrestled black holes for fun.

Gorr is also a very experienced torturer, claiming that even gods of torture would reveal the locations of their children before his blade. Several times throughout the series Gorr is shown trying to cause a God as much pain as possible before killing it. 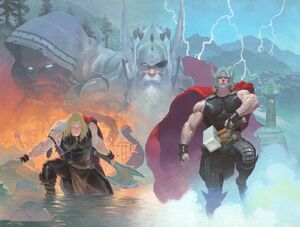 Gorr among the three Thors. 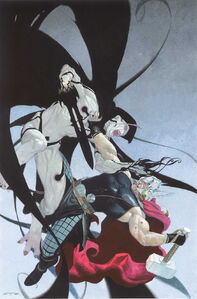 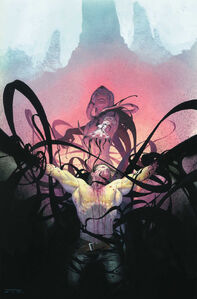 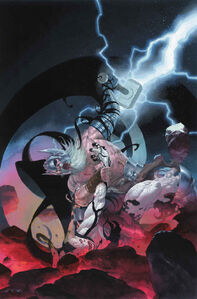 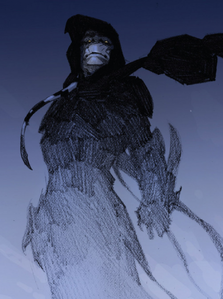 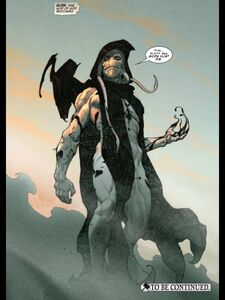 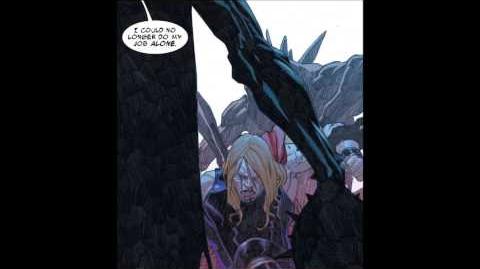 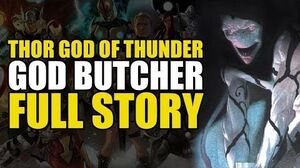 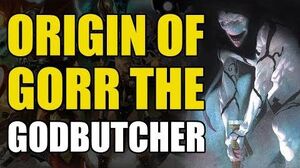 The Origin of Gorr The Godbutcher (Thor God of Thunder Origins) 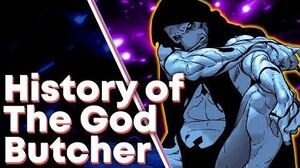 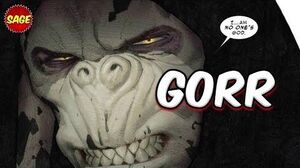 Who is Marvel's Gorr the god butcher? Stronger than three Thors.
Add a photo to this gallery

Retrieved from "https://villains.fandom.com/wiki/Gorr_the_God_Butcher?oldid=3557412"
Community content is available under CC-BY-SA unless otherwise noted.