Keep Rapunzel for herself.

Gothel is an evil sorceress and the main antagonist of Barbie as Rapunzel.

She was voiced by Anjelica Huston, who also played Grand High Witch in The Witches, and voiced by Diane Pershing in the PC game who also voiced Poison Ivy

When Rapunzel, the protagonist of the movie, was a baby, Gothel kidnapped her and put her in the manor hidden deeply in dark woods behind the magic wall. Gothel made Rapunzel her own servant, who must keep the manor in the right order. She categorically hates painting, and, when she saw traces of paint on Rapunzel's face, she got furious. She also got furious when she found one squeaking step in the stairs.

Rapunzel accidentaly discovered many things from Gothel's past in the basement; Gothel had many invitations on different balls. Penelope found a painting of Gothel and an unknown man (later it became clear it was Rapunzel's father, King Wilhelm) whose face was torn. Rapunzel also found a silver hairbrush gifted to her by her biological parents for her first birthday—Rapunzel was very confused by this, as Gothel had apparently always told her that she had found Rapunzel when she was only a few days old after she was abandoned by her biological parents. In that moment, Gothel called Rapunzel.

When Rapunzel discovered a secret tunnel and went to the village, Otto, Gothel's pet ferret, told Gothel everything about Rapunzel's trip. Gothel appeared in Rapunzel's room and asked her the name of the lad that Rapunzel met during her walk. Rapunzel did not know his name, so she answered honestly, she didn't know. Gothel destroyed Rapunzel's paintings and brushes and transformed Rapunzel's room in a tall tower with no enter and told Rapunzel it would be worse if she won't say his name.

Rapunzel's hairbrush transformed into the silver paintbrush by her fairy Alice. Rapunzel created a magical entry into Stefan's kingdom; he invited her on masquerade ball in honor of his birthday. Rapunzel returned in the tower and began painting dresses. Otto noticed the shine of paintbrush from tower's windows and told Gothel about it.

Gothel appeared and found the magical gateway, painted by Rapunzel. She destroyed it, cut Rapunzel's hair off, and broke her silver paintbrush. Gothel answered one more time about the guy's name. Rapunzel answered she didn't know, and Gothel, with Rapunzel's hair, put a horrible spell to Rapunzel's tower and flew to Stefan's castle.

Stefan saw a person with long hair at the ball. He thought it was Rapunzel, and followed her. In the centre of a maze, Stefan chased "Rapunzel". Gothel opened her true face and spoke to him. Stefan told her he was about to see Rapunzel, but Gothel got furious and began attacking him. Stefan ran away, and Gothel followed. Stefan's little sisters and his brother wanted to help Prince Stefan, but Gothel attacked them, and they ran away. Gothel came in the ballroom, where King Frederick and King Wilhelm were fighting.

Gothel threw their swords away and told everyone she was King Wilhelm's ex-lover who kidnapped Rapunzel as revenge. Gothel tries to kill everyone in the ballroom, but Rapunzel, Penelope, and Hobie appeared. Gothel then tries to kill Rapunzel until she traps her into the tower painting that was painted by Rapunzel before to turn her back to the tower again. Gothel got into the tower, bewitched by herself, and all her spells are powerless against her only spell to "never release a prisoner with a lying heart".

Gothel stays in the tower and Otto becomes her servant. Gothel is still as capricious as she used to be and it's implied that she ultimately dies of starvation.

She hates liars, yet she is one herself. Gothel is shown to be very capritious, cruel, bossy, ruthless, violent, petty and hypocritical in the film. She is very captious, and if there is a single squeaking step in the staircase, she screams at Rapunzel, because it's Rapunzel's duty to watch over the manor. Gothel herself does nothing for the manor, instead she rides a horse, drinks tea that has to be done in six minutes, or has 'beauty naps'. Even after she's captured by her own spell, she does nothing for herself, but forces Otto instead. She is hypocritical when it comes to lying as she doesn't like being lied to, but has no qualms about lying to others herself. She is also narrow-minded, which led her to falsely believe that Rapunzel is lying to her when she's says she doesn't know Stefan's name (when in truth, Rapunzel is telling the truth) and to foolishly plant the seeds of her own downfall in the form being trapped in the tower forever.

Gothel's appearance is different from most other female characters. She has gray hair pulled back into a bun style. She has cold green eyes and is one of the few characters to have a long face.

For the most part of the film, Gothel is seen to wear a dark maroon and green dress. Its collar covers all the neck. The top layer of the dress is full length, everywhere except the very front centre that points up into a V, showing a layer underneath. The top layer is dark green with a yellow furry trim around the neck, sleeves and bottom of the skirt. The sleeves are bell shaped, and there are straight red sleeves under. The green part also slopes down into a small V at the back of the bodice, showing a little of the red underneath. Gothel wears a hat in medieval style with yellow furry trim. Otto, her ferret, is usually wrapped around her neck like a scarf.

She wears long black gloves, as well as a gold necklace with three black stones in it, and a gold chain belt with a black stone. At the start of this scene she is also wearing a green mask edged in white with purple feathers along the top edge, and a hat which is shaped like a triangular bowl, it is dark green, with a similar pattern to the dress, in black and a white furry trim on the top edge. She is also wearing Otto around her neck and the piece of hair she cut off Rapuzel at the tower. 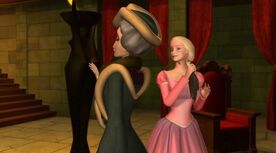 Gothel arriving home at her manor. 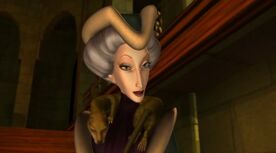 "Don't repeat your errors of yesterday. You steamed that tea for six minutes! I expect six and a half minutes no more, no less!" 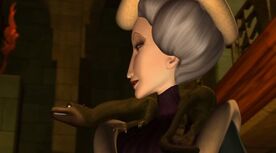 Gothel and her pet ferret, Otto. 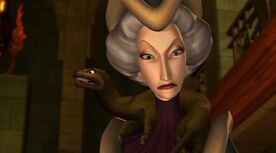 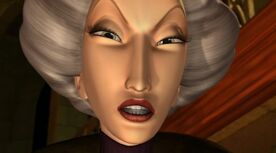 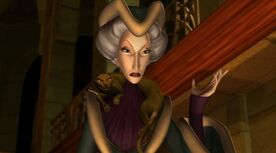 "Painting again? What about your duties?" 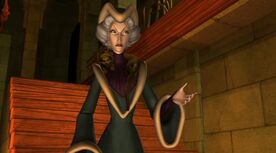 Gothel being told by Rapunzel that she finished her chores. 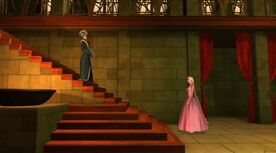 Gothel asking Rapunzel if she finished her chores which she confirmed so. 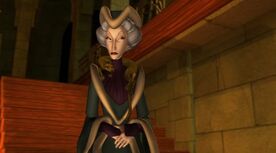 "Washed and mended my clothes?" 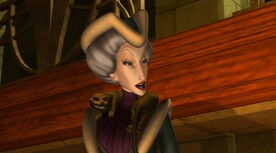 Gothel after she hears the stairs creak. 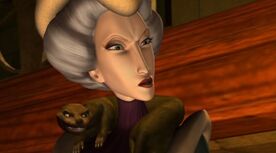 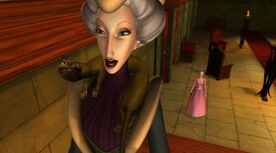 "I've taken care of you since you were a baby and this is how you thank me!" 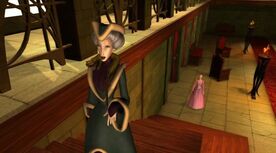 "By fritting away your time? Painting? This is treacherous!"
Add a photo to this gallery

Retrieved from "https://villains.fandom.com/wiki/Gothel_(Barbie)?oldid=4140218"
Community content is available under CC-BY-SA unless otherwise noted.