The Lord of the Balrogs

The King of the Balrogs
General of Morgoth

Most trusted servant of Morgoth

Ensure his master Morgoth becomes Lord of the Earth by any means necessary (failed).

Gothmog (Sindarin IPA: [ˈɡoθmoɡ]) was a supporting antagonist in The Silmarillion by JR.R. Tolkien. He was the Lord of the Balrogs during the First Age of Middle-earth and one of Morgoth's right-hand servants.

Gothmog was the High Captain of Angband, one of Morgoth's most trusted generals, leading the Dark Lord's forces to victory in countless battles. His only equal in rank was Sauron. Gothmog, like the rest of his kind, carried a fiery whip into battle, but he was also known to have wielded a great black ax, which was feared by elves across the continent of Beleriand.

Breaking the Siege of Angband

Gothmog fought in numerous battles in the War of the Jewels and led the charge in the Battle of the Sudden Flame when he broke the Siege of Angband. Gothmog may have been the one who caused the flame to spew over the Thangorodrim volcanoes, because of his pyrokinetic nature.

Gothmog also had a part in the Battle of Unnumbered Tears, where he slew countless elves and humans. Gothmog had an alliance with three treacherous Easterling men, who betrayed their allies by stabbing them in the back at the height of battle.

During the time of Earendil, Gothmog led the Siege of Gondolin, taking it unawares during a festival. He razed large portions to the ground and overran it with his Orcs, dragons, demons, and monsters. They were assisted by the King's treacherous nephew Maeglin, who gave them the location of the city. Gothmog led all his Balrogs into the battle. He was successful in completely destroying Gondolin, and was dueling Ecthalion, the leader of the House of the Fountain, who fought the demon lord in close combat in the Fountain Square. Finally, Ecthelion plunged the diamond-tipped spike on his helmet into Gothmog, and they fell together into the fountain. Gothmog's fire was quenched, and both died. 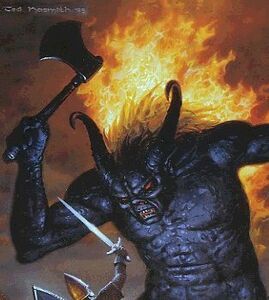 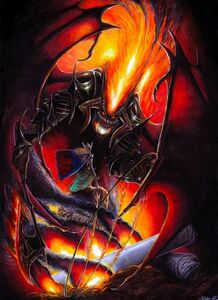 Ecthelion and Gothmog in battle.