Second-in-command of the forces on Gondor and Minas Tirith

Wipe out the entire race of Men.
Serve his master and help him conquer Middle-earth (all failed).

Gothmog is a major antagonist in The Lord of the Rings trilogy, serving as a supporting antagonist in The Return of the King and its film adaptation. He is an Orc commander who works for Sauron, and leads the armies of Mordor against Minas Tirith in the Battle of Pelennor Fields, alongside the Witch-king of Angmar, Sauron's most trusted lieutenant. Gothmog's race is unknown in the books, but he is portrayed as an Orc in the films.

He was portrayed by Lawrence Makoare (who also portrays the Witch-king of Angmar, Lurtz, and Bolg) and was voiced by Craig Parker.

Gothmog was the second-in-command of the Witch-king of Angmar in the Third Age, from Minas Morgul, notably at the Battle of the Pelennor Fields. He assumed control of all 7,000 or so Orcs at that battle after the Witch-king was slain by Eowyn and Merry. Gothmog's race is unknown in the books, but he is assumed in all media to be an Orc or related person. He is mentioned only once in The Lord of the Rings, at the Battle of the Pelennor Fields, following the loss of his master. In response to the arrival of the Rohirrim, he called his army's reserve out of Osgiliath and into the main battle, and brought in Easterlings, Southrons, Variags, and troll-men "into the fray".

In Peter Jackson's 2003 film, The Lord of the Rings: The Return of the King, Gothmog is portrayed as a deformed Morannon orc-general with a crippled left arm, and his role is brought out more than his single mention in the 3rd book in effect playing the role of one of the film's major antagonists.

Although his name was never spoken aloud in the film, officially-licensed merchandise confirms that this character is meant to represent the same Gothmog mentioned in the novel. He is first seen commanding the Orcs crossing the Anduin river to the western half of Osgiliath, which was still held by Men. Gothmog orders the first shot fired in the Battle of Osgiliath. In the battle, he sends that boat-legion of orcs across the Anduin river by boat, while after Faramir's retreat a second legion enters the city from Minas Morgul via the repaired bridge over the Anduin in Osgiliath which the orcs dominating the eastern half of the city had rebuilt.

The troops of Gondor retreated, leaving behind their wounded, one of whom is Madril, the badly-wounded captain of the Ithilien Rangers, whom Gothmog kills with another orc underling's spear, proclaiming to his troops triumphantly that now Orcs would rise to dominance over Men. The Witch-king, arrived from Minas Morgul, then instructs him to assault Minas Tirith using all four legions there at his disposal. Gothmog asks about Gandalf but the Witch-king replies that he will break him.

When Faramir rides out with a small band of Gondor Knights on horseback, attempting to retake the city, Gothmog orders his archers to fire a volley from the ruins of Osgiliath which kills all the knights save Faramir. Once his forces arrive on the Pelennor Fields, he orders the heads of the dead soldiers in Osgiliath to be launched off the catapults, to instill fear into the hearts of Gondor's soldiers and to lower their morale.

Gothmog then begins directing the main ground operations, from catapults to siege towers. He becomes enraged when the doors into the city won't budge, ordering Grond to be brought forth to smash it down. Gothmog is almost hit at one point by a huge rock fired at him by one of Gondor's many trebuchets, but it misses him by about a foot, prompting him to mock his opponents by spitting on it. His lieutenants are Guritz, with the skull on his helmet, who seemed to be the siege commander, and Murgash, a Black Uruk.

In the unextended theatrical release, Gothmog's fate is not revealed, as he is last seen backing away from the charging Rohirrim. In the Extended Edition, he is shown to have survived the onslaught and duels Éowyn, who gains the upper hand and wounds his leg. Gothmog collapses in pain moments before the Witch-king arrives on the scene of the battle. Éowyn succeeds in destroying the Witch-king but is injured in the process and crawls to Merry.

At this point, Gothmog rises, furious for revenge, and uses an ax for support as he limps towards her. As he approaches, he discards the axe and picks up a mace, preparing to kill Éowyn once and for all. Aragorn, unaware that he is saving anyone (or who Gothmog even is), rushes in and chops off Gothmog's arm. Gimli rushes in from behind and strikes Gothmog in the torso with his ax, before Aragorn delivers the final blow to his back, finishing him off.

Like all Mordor Orcs, Gothmog despised the race of Men, wishing to wipe them out and have Orcs reign supreme instead.

He is merciless, planning on killing the entire population of Minas Tirith and murdering Madril while defenseless, as well as sadistic, laughing callously when Minas Tirith is desolated and sending the heads of dead Gondor soldiers onto the city. He is even tough on his own men, not allowing them to evade catapulted rubble and pushing one away when trying to help him. He also proved to be a capable fighter as he fought Éowyn eligibly enough before being wounded by her.

He is also an experienced leader, being well capable of managing to strategize and employ tactics effectively such as knowing of and calling for Grond to destroy the gate of Minas Tirith and using the water to take Osgiliath, both of which were successful. He also informed the Orcs to have pikes in the front lines and the archers behind and uses intimidation, stealth, and fear inducement on his opponents. He likely experienced war due to his injuries and clearly had courage, participating in the midst of battle.

Gothmog was loyal to Sauron and his servant, the Witch-king of Angmar, following his commands. He was also shown to be vengeful, however, as he attempted to kill Éowyn after the latter wounded him. Despite being built for war, he did show fear when the Rohirrim charged at him and managed to decimate and break through the lines of his forces and route many of them in the process. 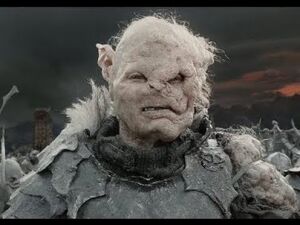 The Lord of the rings- The best of Gothmog, the most charismatic Mordor Orc HD 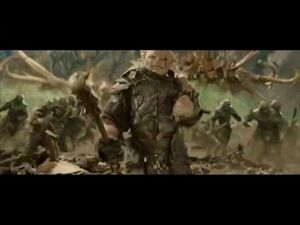