Get revenge on the humans.

Gotsumon is a minor character in Digimon Adventures 01 and 02, but one of the main antagonists later supporting protagonist in Digimon Data Squad. He serves as a flunky to Merukimon.

He was voiced by the late Michael Lindsay in the English dubbed version of Digimon Data Squad.

Gotsumon is a small Rookie Class Digimon that looks like a creature made from gray rocks with yellow eyes.

Meteormon is Gutsumon's Ultimate form. He has the same appearence as his alter-ego, Gotsumon, except he is greenish-white colored and has the same yellow eyes, and can also fly.

Gotsumon was a minion of Myotismon. His closest friend of of another Digimon Pumpkinmon. Even though they were ordered to find the 8th DigiDestined, all they wanted to to was to have fun. When they met Matt, T.K., and Gabumon they became friends. When Myotismon found out he ordered them to attack the DigiDestined, but they refused. Doing so Myotismon killed them. In the edited dub, Myotismon sent them to his dungeon in the Digital World.

A small ammount of Gotsumon were under the control of the Digimon Emperor. They were eventually free from thanks to the DigiDestined.

Gotsumon first appeared in the Digimon Data Squad episode "The Digi-Egg That Fell To Earth", where he works for Merukimon. He often uses a Yanmamon as transportation. Gotsumon hated humans more than Keenan. While Marcus, Agumon, Yoshi, Lalamon, Thomas, and Gaomon were at the Ice Ridge, Gotsumon summoned a Mammothmon to attack them and cause a avalanche. After Keenan betrayed Gotsumon, he seeks revenge on Keenan for betraying him. He even joined sides with SaberLeomon and sent his army to invade and attack the humans and the DATS team in the Real World. Gotsumon attempts to take Keenan back to the Digital World, but Keenan refused and Falcomon drove him away. Gotsumon angrily then resumed the attack on the humans until a mysterious human named Akihiro Kurata opened up a Digital Gate, sending Gotsumon and his army back to the Digital World. Gotsumon, injured from the battle, told SaberLeomon about that. With SaberLeomon defeated, Gotsumon summoned a Zudomon to defeat DATS. After Zudomon was defeated, Gotsumon fought the DATS in a final battle, revealing his true form, Meteormon. He almost got the upper hand of the DATA SQUAD, but RizeGreymon caught Meteormon and was stunned by Lilamon's pollen. Before Meteormon can attack again, RizeGreymon manages to defeat him with his Rising Destroyer, reverting into a Digi-Egg.

Later in the episode "The Royal Knights Assemble" Gotsumon was reborn, after Marcus and the others returned to the Digital World and redeemed himself to join the DATS team due to having no memory from his previous life.

A Digimon of the Mineral type who is structured from mineral data inside fields, and thus bears a strong phylactic power. This energetic person mischievously makes lower-leveled Digimon ally with him, and romps about the system like a jovial-natured sergeant. Although a little selfish, he will rage violently like a volcanic eruption once he gets angry. The aforementioned mineral data will change depending on where he was born and bred, thus hiding the potential to evolve into various beings. His special attack is "Angry Rock", which fires out super-hard minerals from the tip of his head.

Gotsumon can fire a rock from his head. As Meteormon, he can fly and summon meteors from another dimension and hurl them at the enemy. In Digimon Data Squad, he can control big rocks and send them falling down from the sky. 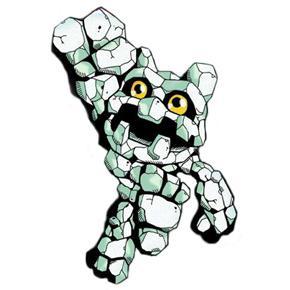 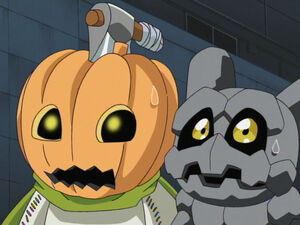 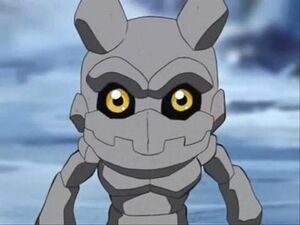