Champion of the Super Fight (formerly)

Executive member of the Monster Association

Transform everyone into monsters and convince them to join the Monster Association (semi-successful).

Gouketsu is a major antagonist from the manga/anime series, One Punch Man, serving as one of the main antagonists in the Super Fight Arc.

He was once a martial artist and the first champion of the Super Fight Tournament. He later challenged Orochi to a battle, but was quickly defeated and was given a choice; join the Monster Association or die. Since then, Gouketsu rose in the ranks, became part of the executives and seeks to find new recruits for the Monster Association.

When Gouketsu was a human, he was a muscular man with spiky, dark hair and a black karate uniform. He also had a scar on the side of his upper lip.

When he became a monster, he grew four sharp-looking eyes, sharp teeth and spikes across his entire body. His scar also seems to have disappeared and has instead been replaced with a large X-shaped one instead at the bottom of his face.

Despite his terrifying appearance, Gouketsu is a calm, intelligent being, knowing his limits and keeping his arrogance in check. He is willing to spare the lives of others and give them the opportunity to become monsters like him and join the Monster Association. He also respects those with remarkable skills and strength, hence one of his reasoning of sparing others.

Nonetheless, he can still come off being rather arrogant. He treats other martial artists as lower classes compared to him and states that becoming monsters will turn them into better fighters.

Despite this, he is self aware that there are other monsters that are above him, as he uses this reasoning to rationalize with Bakuzan, who attempted to beat him after becoming a monster. He's also shown to connect with others, as he understood Bakuzan's feeling when he transformed into a monster.

Gouketsu was once the champion of the Super Fight Tournament eleven years in the past. He later on confronted Orochi to a battle, only to be heavily beaten. Gouketsu was then later taken to the Monster Association's hideout where he was heavily tortured. Eventually, his mind had snapped and convinced himself to join the Monster Association. As a result, he consumed a Monster Cell given him and transformed into the hideous beast he is today.

Before arriving to the stadium, Gouketsu encountered Genos, who had recently gained a new upgrade. Despite this, Genos was badly defeated. Gouketsu then made his way to the current Super Fight Tournament, in which he introduced himself to the fighters. Max and Sneck attempted to fight him, but were easily swatted away. Eventually, Gouketsu was able to convince the following fighters to become monsters; Choze, Benpatsu, Volten, and Hamukichi.

He then attempts to convince Suiryu, but he refused. Eventually, Gouketsu decided to let his new allies kill Suiryu and watch the battle commence. After defeating all of the monsters, Gouketsu was impressed by Suiryu's skill and attempted to offer him another chance to join, even offering a high position in the Monster Association. Despite this, Suiryu refused once more, leaving Gouketsu no choice but to beat him to a pulp.

Afterwards, he decides to let his disciples, the Three Crows to finish him off. Gouketsu then watches as Bakuzan consumes a large amount of Monster Cells, only to collapse down to the floor. Gouketsu noted that the human body could only handle one Monster Cell and thus was not surprised to see the results. Max and Sneck eventually awaken from the rubble and help Suiryu kill off the Three Crows. Though they managed to kill them, the three heroes were bested by Gouketsu once more.

Bakuzan then awakens, transformed into a monster. Gouketsu was surprised to see the transformation was a success and thus classified him as a Dragon Level Threat, based on his appearance and strength. Drunken with power, Bakuzan declared himself as the strongest monster there is. Although Gouketsu attempts to reason with him, Bakuzan refuses to listen and battles him, only to be effortlessly defeated. Eventually Gouketsu reminds him once more that, even though he is indeed a powerful monster, there are monsters that are far more powerful than him and should be cautious on taking the Hero Association on his own. Gouketsu then proceeds to leave him be, heading off to Z-City.

Gouketsu was later then killed by Saitama, with his head being sent flying back to the stadium in front of Suiryu.

When he was a human, Gouketsu had won the first Super Fight Tournament and became the first champion. He believed in himself that he could take on the Monster King himself with his abilities.

As he transformed into a monster, his power and abilities have been augmented to an immense degree that labels him a Dragon Level Threat. He has taken out Genos and Suiryu with ease and effortlessly took on Bakuzan after he became a monster as well. 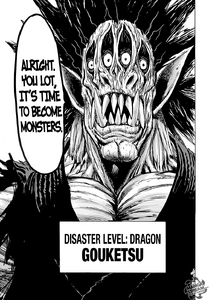 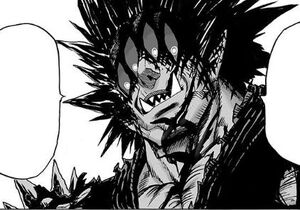 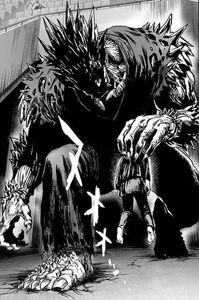 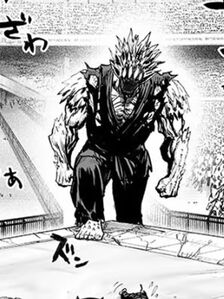 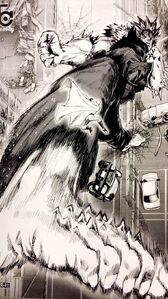 Retrieved from "https://villains.fandom.com/wiki/Gouketsu?oldid=3827007"
Community content is available under CC-BY-SA unless otherwise noted.