Member of the Avatar cult

Bowing in front of no one.

Get some informations from Fairy Tail.

Torturer
Goumon is a villain in Fairy Tail. He is a member of Avatar.

He is voiced by Yuki Sanpei in the Japanese version and Shawn Gann in the English version of the anime.

Goumon is a bald, bearded, middle-aged man who wears a kimono. His kimono has Avatar's sign on the left chest. He also has a tattoo on his forehead he believes means "Zeref" while it actually means "matcha".

Like the other members he's a Zeref-fanatic. He also has a hobby of bowing towards nobody and making tea related puns.

Like other Avatar's top members he appears in the meeting. When Natsu and Lucy break in his quarters he attacks them with his torture devices and is defeated by Natsu with a single hit. Short after he stands up and ties up Natsu and Virgo, after Mary incapacitated Lucy. Despite this Natsu tries to attack Mary, but is stopped by Jerome who threathens to cut off Lucy's head. When other Avatar members try to exercute "Operation Purification", Goumon doesn't participate and takes care of Lucy and Natsu. He decides to torture Lucy with the goat licking torture, but after Lucy and Natsu state they still believe in Gray he decides to bisect Lucy, but before he can he's stopped by Gray who frozes him solid. Later he's seen tied up on his wooden horse as he is found by the Rune Squad, who proceed to arrest him. 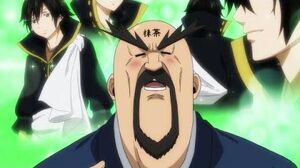