Carrying out missions for ISS.

An outdated cyborg model working for ISS, Goushima was sent after Shin. He was killed when the superior cyborg cut off his head, revealing a bomb that promptly self-destructs.

Cyborg Soldier Level 2 was revived by Shadow Moon along with four other monsters, Sai Mutant, Agito, Garai, and Zu. He was defeated along with his fellow revived monsters by Kamen Riders ZO and J.

Due to a change in history caused by Ankh leaving a O Medal behind in 1971, Shocker achieved its goal of world dominion by using the medal to create a new kaijin called Shocker Greeed, who defeated the Double Riders. Thus members from the various groups that would had manifested in the normal timeline after Shocker's destruction instead joined Shocker, among those included Cyborg Soldier Level 2. As more and more Kamen Riders started appearing to fight Shocker's forces, Shin fought against Goushima once more.

Cyborg Soldier Level 2 appears as one of the members of the revived Dai-Shocker. 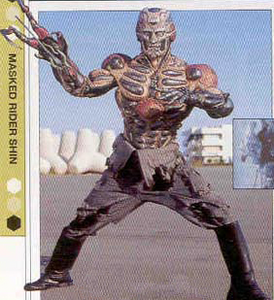 Cyborg Soldier Level 2
Add a photo to this gallery
Retrieved from "https://villains.fandom.com/wiki/Goushima?oldid=3537038"
Community content is available under CC-BY-SA unless otherwise noted.