Conspirators
The Government of Darkness (in Japanese: 暗黒政府, Ankoku Seifu?), abbreviated as G.O.D. (In Japanese: 秘密機関, Goddo Himitsu Kikan?) is the tyrannical secret organization that Kamen Rider X battles against and the main antagonists of the third installment of the Kamen Rider franchise, Kamen Rider X. The organization's monsters are based on the figures of Greek mythology and other historical or fictional figures.

The Government of Darkness was a secret society in which opposing countries secretly joined hands and used cyborg kaijin to try and gain world domination. They were a global conspiracy much more elusive than Shocker or Destron before them, with secret bases in every major country around the world.

At some point, GOD began eyeing the robotics that was being developed by Dr. Keitaro Jin. After the scientist refused to work for them, GOD had him marked for death and sent the Shinwakaijin Neptune to eliminate him. Both Keitaro and his son Keisuke were shot and fatally wounded but, in his last moments, Keitaro performed a cyborg remodeling surgery on his son, turning him into Kamen Rider X so that he may survive and fight against GOD's schemes for world domination.

The G.O.D Akuninkaijin Ari Capone returned as member of Black Satan. He is seen bringing Mr. Titan's coffin alongside other revived kaijin to Church.

The Government of Darkness also exists in the A.R. World of X-Rider, where it is fought by a alternate X-Rider. As with the original, King Dark is a giant robot and the mastermind behind the Government Of Darkness (GOD), with Apollo Geist as his lieutenant. The Government of Darkness joined Dai-Shocker, a coalition of the evil organizations that were fought by the Kamen Riders. After the Dai-Shocker army was wiped out by a gathering of 25 Kamen Riders after Dai-Shocker started its invasion of the A.R. Worlds, King Dark emerged from the ruins of the Dai-Shocker Castle. Countered by Kamen Rider J summoned by Diend, he was killed by Decade Complete Form Jumbo Formation.

Apollo Geist emerged as the leader of Dai-Shocker, having been revived by the Government of Darkness after being killed by X-Rider. However, his lifespan is short as a result and thus uses the Perfecter to take the life force out of people to augment his own. When the Perfecter is stolen from him by Diend and then destroyed by Decade, Apollo Geist eventually comes up with the plan to marry Yuki, the Fangire Queen, becoming a Fangire as a result. As a result of his transformation, he now becomes Super Apollo Geist with the ability to remove other realities from existence. Using his power to revive the monsters from the Nine Worlds and attempting to make Natsumi his bride after Yuki is destroyed by Decade Complete Form, Super Apollo Geist fights Decade and Diend until help arrives in the form of Hibiki and Kiva. Kiva and Hibiki distract Super Apollo Geist long enough for him to be mortally wounded by Decade Complete Form with Diend's power, Geist swearing that he will "revive as the greatest nuisance in the universe" before he is destroyed.

In an alternate timeline caused by Ankh leaving a O-Medal behind in the year 1971, Shocker achieved its goal of dominion of Japan with the Shocker Greeed. The Government of Darkness, represented by Apollo Geist and King Dark, was among the various organizations that formed a partnership with Shocker. The two of them were among the Shocker leaders who were destroyed when the Great Leader of Shocker transformed into Rock Great Leader.

Apollo Geist reappeared as part of the new Dai-Shocker assembled by Tsukasa to wipe out the Super Sentai, ensuring the survival of the Kamen Riders. After Dai-Shocker's alliance with Dai-Zangyack is revealed, Apollo Geist is once again defeated by Kamen Rider Fourze Magnet States.

The Warfare Agents are the main footsoldiers of G.O.D., serving as its spies and assassins. They are clad in black jumpsuits with red pointed collars and miniature capes that stretch down to just above their wastes, while on their heads they wear a pair of silver goggles and a black beret. They mainly wield knives, machetes and occasionally submachine guns. They are also capable of assuming human guises for infiltration purposes.

The security division is a special division of G.O.D. Warfare Agents under the command of Apollo Geist who act as internal security for the G.O.D. organization, eliminating traitors and ineffective members within the organization. Their staff all comes from champion-class athletes and other physically powerful, specially-trained individuals.

The GP are an elite division of Agents who are responsible for patrolling GOD's Palace of Apollon and other such secret bases worldwide. They are distinguished from regular Warfare Agents by wearing black helmets instead of berets and green armbands displaying the letters "GP" on their left arms.

Within G.O.D. are a number of scientists who have been conscripted, willingly or otherwise, to serve as researchers for the organization. They are responsible for creating and repairing GOD's kaijin, as well as inventing other devices for the organization to use to cause havoc and destruction throughout the world.

The G.O.D. Kaijin are cybernetic and mutant monsters used by G.O.D. as field agents, each commanding a team of Warfare Agents. The initial kaijin used by G.O.D. were the Shinwakaijin, which were modeled after Greek mythological figures. Around two-thirds of the way through the series, however, G.O.D. switched to using the Akuninkaijin, which were based off combinations of animals and infamous historical and fictional figures.

The Palace of Apollon is G.O.D.'s main headquarters in Japan. It is an elaborate base that stretches underground and houses G.O.D.'s various departments, including its communications and science divisions. It also houses a gym for G.O.D.'s security division to train and has numerous traps in case of intruders.

After the Palace of Apollon was destroyed, the main place from which G.O.D. coordinated their attacks was the lair of King Dark, an elaborate underground tunnel system which housed the hulking giant. It was here that King Dark, hunched over, issued orders to the Akuninkaijin of G.O.D.

The lair's tunnels are connected to a variety of entrances all across Japan, enabling it to be accessed from multiple secret locations. This also allows King Dark's followers to be dispersed through multiple areas.

In the final episode, King Dark emerged from this lair to go on a rampage.

The monsters of G.O.D. are split into two groups:

These monsters are based on Greek Mythology figures:

These monsters are based on animals and historic or fictional figures: 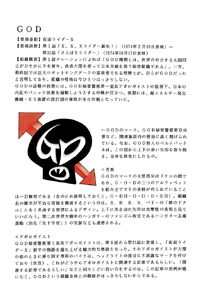 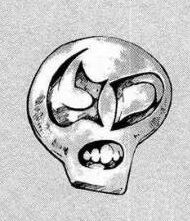 GOD as seen in the manga. 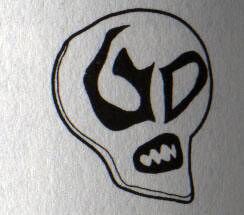 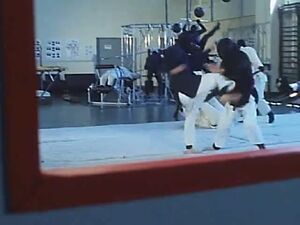 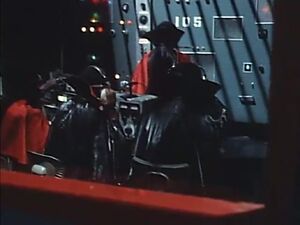 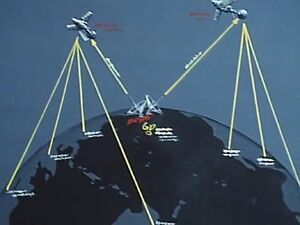 A map of GOD's satellite network.