Chancellor of the Klingon Empire

To maintain his rule over the Klingon Empire at any cost

Gowron is an antagonist who appeared in the Star Trek franchise, introducing as an anti-hero in Star Trek: The Next Generation and a minor character turned major antagonist in Star Trek: Deep Space 9. He was a corrupt Chancellor of the Klingon Empire who acted more in his sole interest than for his people.

He was portrayed by Robert O'Reilly.

As a Klingon, Gowron is naturally aggressive, provocative and firmly adheres to a sense of honor, though his ego and ambition easily overshadow his nobler qualities. He is not reluctant to use violence or even murder to achieve his ends. Unlike his people, Gowron is willing to use bribery or outside support if it assures his victory.

Although only caring about his own opinion, Gowron seems to have some respect for Jean-Luc Picard due to the Starfleet captain's assistance in several conflicts. He also held Worf in esteem since helping against House Duras but their relationship eventually fell apart when Worf refused to join Gowron as he became more corrupt to end his reign and Gowron came to despise Worf so much that he was ready to kill him despite their previous friendship.

Gowron's actions are mostly guided by his arrogance and lust for power, having ended the Federation alliance with the Klingon Empire out of anger that the Federation council dared undermine his authority and deliberately tarnish the reputation of Gowron. Martok because his political influence overshadowed the reign of Gowron. Ironically, Gowron's arrogance and all-consuming ambition caused his downfall.

Before 2367, Gowron was a political outsider on the Klingon High Council, who often challenged their decisions. After the death of Chancellor K'mpec, Gowron and Duras, son of Ja'rod became the two leading candidates for leadership of the council. It was suspected that Gowron had in fact poisoned K'mpec to advance his career although many believe that K'mpec was indeed poisoned by Duras. At K'mpec's posthumous request, Captain Jean-Luc Picard became the Arbiter of Succession to decide between Gowron and Duras and secretly try to find out who had poisoned K'mpec.

Duras attempted to kill Gowron during the Rite of Succession, but the attempt failed. Subsequently, the two Klingons were subjected to the Ja'chuq ceremony much to their annoyance as the practice of listing battle victories was both time-consuming and outdated. In an attempt to speed up the ceremony, Gowron tried to bribe the Klingon hybrid ambassador, K'Ehleyr, but it was ultimately unsuccessful. Duras was later killed by a Starfleet officer, Worf, following the murder of K'Ehleyr, thus ensuring Gowron's election as chancellor.

Following Gowron's election, Duras's sisters, Lursa and B'Etor attempted to challenge Gowron's office. Fearing the imminence of a conflict that could threaten his rise to power, Gowron tried to obtain the potential help of the Federation by the intermediary of a Picard in front of continued and concluded his role of Arbiter of Succession but Picard to only promises Gowron that he will only be able to help him within the measures of Klingon law, which Gowron does not think is enough. On Qo'noS, the sisters appealed to the High Council to install Toral, the illegitimate son of Duras, as Council leader. After deliberation, Picard would ultimately appoint Gowron as the rightful chancellor since Toral has yet to pay a sange for his people as required by Klingon law. The resulting division of loyalty in the council sparked the Klingon Civil War in late 2367. After a few weeks, Gowron's side was victorious. With the help of the Federation, Duras's family was exposed of having ties with the Romulan Star Empire. In addition, Gowron reinstated the House of Mogh because of the actions of Worf and his brother Kurn coming to his aid in the conflict.

In the aftermath of the war, Gowron found it was best to avoid calling attention to the Federation's support during the war. He ordered all official accounts of the events to omit the Federation's involvement.

When a clone of Kahless the Unforgettable was created in 2369, Gowron dismissed his right to rule the Empire. He became worried, however, that the clone's existence would plunge the Klingon Empire into another civil war. In order to keep the peace, he agreed to support Kahless as the spiritual leader of his people, while Gowron would remain leader of the Council.

In 2371, a Klingon named Kozak was killed in an accident at Quark's on Deep Space 9. D'Ghor, posing as Kozak's brother, made a claim before Gowron and the Council to the House of Kozak, but Gowron temporarily transferred leadership of the House of Kozak to Quark, who had secretly married Kozak's widow, Grilka. Together, they proved to Gowron that D'Ghor had dishonored himself by trying to financially ruin Kozak for years. D'Ghor challenged Quark to personal combat, but Quark refused to fight. D'Ghor was about to kill the unarmed Ferengi when Gowron intervened, discommended D'Ghor, proclaimed the House of Kozak would become the House of Grilka and commended the Ferengi on his uncommon bravery.

Later that year, Commander Sisko theorized that Gowron had sent the Klingon Intelligence agents Atul, Bo'rak and Morka to Deep Space 9 to spy on a Romulan delegation.

As the cold war between the Dominion and the Alpha Quadrant escalated during the 2370s, Gowron took prominent Klingon General Martok as his military adviser. Martok had secretly been replaced by a Changeling, and used his position to influence Gowron's military decisions. When a civilian revolt took over Cardassia Prime in 2372, Martok spread misinformation that the Cardassian uprising had been supported by the Dominion. He led Gowron to believe that the civilian-led Detapa Council had been replaced by Changelings. Seeking to protect the Empire, Gowron ordered the invasion of the Cardassian Union. The move was condemned by the Federation Council, and Gowron withdrew from the Khitomer Accords, ending the decades long alliance with the Federation.

The invasion was largely a failure, however Gowron declared victory in order to avoid assassination attempts. He fortified his positions in Cardassian space and continued expanding the borders of the Empire. He also ordered several attacks on Romulan targets on the Klingon-Romulan border.

In late 2372, Gowron demanded that the Federation withdraw from the Archanis sector, in particular Archanis IV. During this time, the Dominion planted false information in Starfleet through Odo that Gowron, not Martok, was a Changeling spy.

Starfleet sent a team to Klingon military headquarters on Ty'Gokor to expose Gowron. Eventually they discovered that Martok was, in fact, the Changeling, and Gowron's men killed it.

After the Cardassians joined the Dominion in 2373, Gowron reinstated the Khitomer Accords, and posted a permanent contingent of Klingon officers on the Cardassian border at station Deep Space 9, commanded, ironically, by the real Martok.

Operation Return and other Battles

In early 2374, Gowron was reluctant to involve the Empire in Operation Return. However, he was later persuaded to assist Captain Sisko's forces by Martok and Worf. The late arrival of the Klingon fleet proved critical in the battle, throwing the Dominion lines into disarray and allowed the Defiant to break through.

Several months later, the Dominion and the Orion Syndicate used Gowron's feud with the Klingon ambassador to Farius Prime in an attempt to bring down the Treaty of Alliance. Gelnon and Raimus hoped that by having Liam Bilby, Krole and Flith assassinate the ambassador with Klingon weapons it would look like Gowron had ordered the pro-Dominion ambassador's execution.

Gowron played a role, albeit unknowingly, in bringing the Romulan Star Empire into the war against the Dominion. In late 2374, Captain Sisko contacted Gowron and asked him to issue a formal pardon to Grathon Tolar, who was needed by Sisko and Elim Garak to forge a holorecording.

Early in 2375, both Worf and Martok planned to speak to Gowron, to see if he could find Kor a fitting assignment on Qo'noS.

Jealousy of Martok and Death

Martok's actions in the war had made him a prominent figure throughout the Empire and was regarded by the Klingon people as their savior. Threatened by Martok's growing political influence, Gowron took direct control of the Klingon Defense Force in 2375, and began to undermine Martok's military strategies.

Realizing that Gowron's reckless actions were endangering the entire Alpha Quadrant, Captain Sisko told Worf to do what he had to in order to either make Gowron see sense or remove him from power. Worf attempted to persuade Martok to challenge Gowron, however Martok refused to challenge Gowron after such dishonorable actions in the middle of a war. Seeing no other choice, Worf challenged Gowron was challenged to single combat. Worf defeated Gowron in combat, killing him, and passed the leadership of the High Council to Martok. Despite his disapproval of Gowron's actions, Worf performed the Klingon death ritual for him, acknowledging the former Chancellor as a Klingon warrior.

Worf recalled fighting Gowron for the leadership of the Empire before leaving Deep Space 9 to take up his post as Martok's Federation's ambassador. 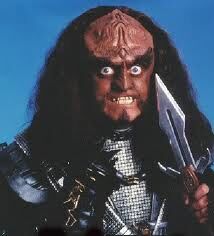 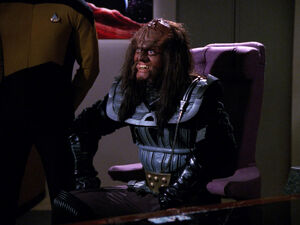 "You will die slowly, Duras." 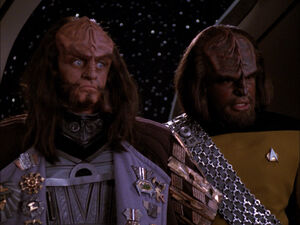 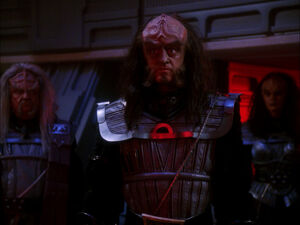 Gowron about to conclude the Rite of Succession. 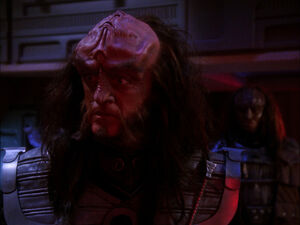 "Your blood will paint the way to the future." 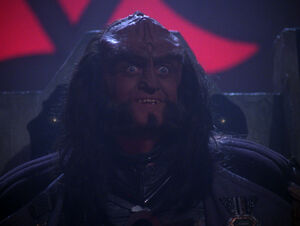 "Perhaps, but not today." 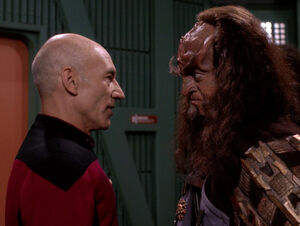 Gowron with the captain Jean-Luc Picard.