Father (by Noah)
Snake (by Seto)
Stepfather (by Seto)

Businessman (both formerly)
Ruler of the Virtual World

Get revenge on Seto Kaiba.

Use the satellite missiles to blow up every major city before hacking their computer to rule the world through the Virtual World (both failed).

Gozaburo Kaiba is a major antagonist in the Yu-Gi-Oh! franchise, as well as the overarching antagonist for Seto Kaiba's entire story arc.

He is the original CEO of Kaiba Corp, the biological father of Noah Kaiba and the adoptive father of Seto and Mokuba Kaiba.

In Gozaburo's childhood, it is possible that he was abused by his own father in the exact same way that he would treat Seto in the future.

He was voiced by Unshō Ishizuka in Japanese and David Wills and later Ted Lewis in English.

Gozaburo was the original founder and CEO of KaibaCorp and a chess grandmaster. He visited an orphanage, hoping to adopt an heir. Here he met Seto, who challenged him to a game of chess, with the stipulation that he and his brother Mokuba would be adopted by Gozabura if Seto won. Gozaburo laughed at first, but said that Seto was an interesting kid and accepted the challenge, which Seto won through cheating.

Gozaburo's abuse of Seto was what motivated Seto to overthrow him. Six years after the adoption, Gozaburo, Seto and ten others attended a KaibaCorp meeting. By the end of the meeting, the ten agreed that starting that day, Seto would be the new president of KaibaCorp and he changed the direction of the company. Seto smirked and asked "Have I learned what you wanted... 'father'?". Gozaburo replied that he has lost his game with Seto and asked him to burn it into his brain that this is what happens to a loser, before jumping out the window, committing suicide. Kaiba remarked that to lose means to die and thanked Gozaburo for teaching him that.

His son, Noah, was nearly slain in a car accident, so he uploaded his mind into the virtual world to save him, and adopted Seto Kaiba and his brother Mokuba so Noah could enter Kaiba's body, but soon became more interested in teaching Seto and making him his new heir. They never go into detail about this, but it is implied that he mentally, emotionally and maybe even physically abused Seto during his time with him. There is a possibility that he gave Noa and Mokuba similar, but less severe treatment as well. He gave Kaiba a large amount of money and told him to pay him back in order to truly become a member of Kaiba Corp, with Lector of the Big Five as the only one allowed to help him. He was able to do this and eventually with the help of Mokuba, took over Kaiba Corp. Gozaburo vanished without a trace after this, uploading his own mind into the virtual world. What happened to him depends on the material. In the original manga, he was so upset about Seto beating him that he committed suicide. However, the original dub of the anime has him commit suicide and upload his mind like he did with Noah and the 4Kids dub has him run away and upload his mind to the virtual world.

There, he and Noah attempted revenge on Seto, teaming up with the Big Five once they became trapped in the virtual world. The Big Five were defeated by Yugi and Katsuya Jonouchi and trapped by Noah, and Noah was defeated by Yugi. Gozaburo revealed to Seto that he was the one behind the whole thing, and all his true intentions. His plan is to use the satellite missiles to destroy every major city on Earth before hacking into the world's computer networks, and rule over humanity from within the Virtual World.

Gozaburo dueled Seto and, at first, he seemed invincible due to his even more powerful version of Exodia, Exodia Necross, who was invincible, until Seto removed the Exodia cards from the graveyard (where they needed to be for Exodia Necross to be invincible) and defeated Gozaburo. He transformed into a beast of flame and attacked Seto, but Noah, who had previously set the virtual world's fortress to self-destruct, held him in place, and he was deleted along with the virtual world. However, he survived long enough to reappear in the real world as a real beast of flame and attempted to take Seto with him by eating the blimp that Seto and the others were escaping in, but the blimp escaped from Gozaburo's flaming jaws and he vanished for good as the flames died down to regular fire.

While Gozaburo in person was dead, Gozaburo did appear in Waking the dragons with Nesbitt thought to have kidnapped/murdered Alister's brother. However Alister stopped hating Kaiba upon learning Dartz was the true criminal. 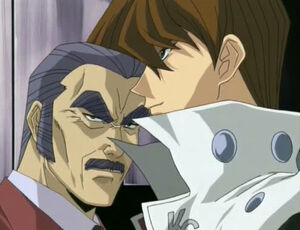 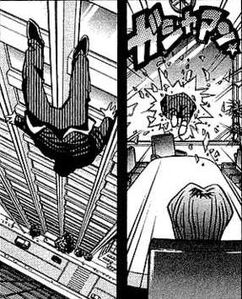 Gozaburo's suicide in the manga. 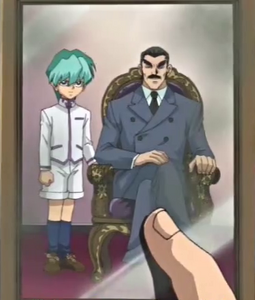 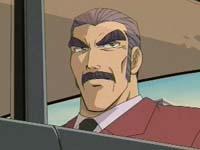